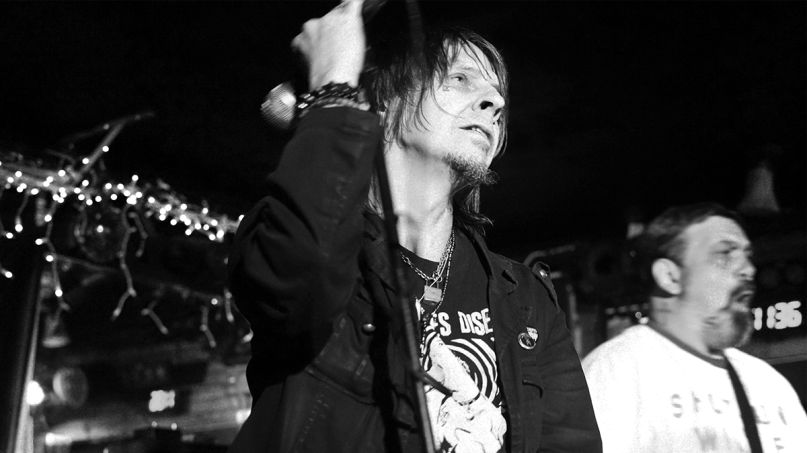 The new disc will mark Eyehategod’s first album in seven years, but that’s not to say they’ve taken time off. As the title of the new album implies, the NOLA sludge vets spent most of that period rigorously touring across the world — as they always have — playing major festivals to seedy dives, like when we caught them last year headlining a dangerous show in the industrial recesses of north Brooklyn.

The band has also renewed their licensing deal with venerable metal label Century Media, which has released the previous four Eyehategod records. The partnership dissolved sometime after 2014’s self-titled album, but the two parties are back together for A History of Nomadic Behavior, issuing a joint statement:

“EyeHateGod are pleased to announce we’ve signed a licensing deal with Century Media Records USA and Europe…! We welcome the new changes along with the new year coming, and want this union to benefit everyone involved, especially our rabid and disturbed fans across the globe!”

Added Century Media Vice President of A&R Mike Gitter: “Eyehategod are survivors on every level. Since 1988 they’ve been part of the framework of extreme music and A History of Nomadic Behavior will be no exception. Theirs is a tough and turbulent road that would have stopped most bands dead in their tracks. Not these NOLA legends. Century Media has been part of their career from the early days and we’re excited to be working together again. Eyegategod [are] here to stay.”

Indeed, Eyehategod have seen much over their three decade career. Their backstory involves run-ins with the law and drugs, the latter often plainly addressed in the band’s misanthropic lyrics. Mostly recently, drummer Aaron Hill was stabbed walking to a venue before a show in Mexico. Yet, the band trudges onward with its crushing mixture of crust, sludge, and doom.

No exact date was given for A History of Nomadic Behavior, but the press release slated it for a “Spring 2021” release. Stay tuned to Heavy Consequence for further album updates and new music as it becomes available. In the meantime, check out the album artwork below.

A History of Nomadic Behavior Artwork: