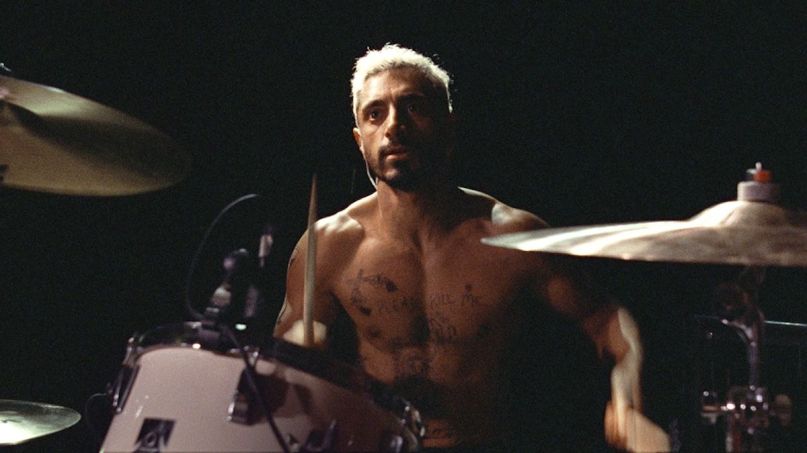 The Pitch: Ruben Stone (Riz Ahmed) has carved out a nice little life for himself: a drug addict years into his recovery, he’s found peace as one half of the post-punk twosome Blackgammon, slamming the drums at venue after venue with girlfriend and guitarist Louise (Olivia Cooke). But one night, he hears a strange pop in his ears, and the sounds of the world fall away from him: imagine listening to the ocean through a seashell, but it doesn’t go away.

A panicked trip to an audiologist shows Ruben the devastating truth: he’s lost the vast majority of his hearing, and it’s not coming back. But Ruben, desperate for a solution, clings to the hope of raising tens of thousands of dollars for cochlear implants that might restore his hearing. What’s more, this dramatic shift in his well-being threatens to send him into relapse.

Lou, fearing the path of self-destruction Ruben’s condition will send him on, convinces him to reluctantly enter a group home for addicts who are deaf or hard-of-hearing. There, Ruben may well find a new sense of purpose, and a life beyond the drum set — if he can accept the reality of his situation.

The Sound of Silence: You can feel the DNA of Derek Cianfrance all throughout Darius Marder‘s Sound of Metal, from its richly textured characters to its innate sense of working-class tragedy. That tracks, since Marder’s a long-time collaborator of Cianfrance’s; he wrote The Place Beyond the Pines, and Cianfrance serves as producer. But Marder’s approach is kinder, even if only in shades — there’s an optimism here that you couldn’t find in Blue Valentine, even if it’s leavened by characters who can’t see it.

Just as important to the film’s textures as Ahmed’s performance (and believe me, we’ll get to it) is its sound design courtesy of Nicolas Becker, which plays with POV in ways that fully immerse and absorb the viewer in the world of deafness. Cianfrance puts us in Ruben’s head, sinking us deep in the muffled voices and aggravating silence that surrounds his every waking moment, only to pull us out and remind us of what the other characters are experiencing with him. It’s an incredible way to signal to hearing audiences the gulf in communication that can happen between hearing and non-hearing people.

King Cochlear: But at the end of the day, Sound of Metal is nothing less than a showcase for Ahmed, inhabiting all of Ruben’s anxious frustration with the restlessness of someone trapped in a pit and unable to climb their way through. His bleach-blonde hair and copious tattoos give the vibe of an angry, violent man, but Ahmed and Marder disabuse us of those notions pretty quickly: he’s kind, gentle, disciplined, making smoothies for Lou and joking with her as they drive on the road. It’s the destabilizing nature of his newfound deafness that knocks Ruben off-course. Without drugs or music, who is he supposed to be?

It’s that raging against the dying of the light that Ahmed makes so compelling, his Ruben all shifting eyes and restless impatience. It’s a portrait of a man stuck in the Bargaining phase of grief, and the agony that comes with that. Ahmed sinks his teeth into the role with all the determination of a Ruben Stone drum solo — he spent six months learning to play the drums and spent almost as much time learning American Sign Language to realistically portray Ruben’s own journey growing accustomed to deaf life. It’s impossible to take your eyes off him, as Ruben grows, transforms, stumbles and learns to live with those mistakes.

Falling on Deaf Ears: Ruben’s journey also allows us a much-needed window into the vibrant, diverse and oft-underserved Deaf community, which Marder replicates here with remarkable alacrity. Gradually, Ruben becomes a vital part of the facility, learning sign language and decoupling himself from the feeling of loss he has towards his hearing. Marder staffs the supporting cast with plenty of real deaf and hard-of-hearing actors, admirably filling out the textures of Ruben’s newfound world while offering much-needed representation in their own right.

Much of this can be credited to Paul Raci‘s Joe, a group leader who serves as Ruben’s sponsor, mentor, and moral compass. While not deaf himself, Raci has been a long-time advocate for deaf rights (his parents are deaf, and he has a long history of deaf-oriented theater), and it’s encouraging to see his layered, fatherly turn here. More than just keeping Ruben sober, Joe has the even more difficult job of convincing him that he cannot see his deafness as a disability — it’s not something to be fixed. Even the prospect of cochlear implants, we learn, may serve to further distance Ruben from not just a community he’s grown to embrace, but from his own sense of self.

The Verdict: All the above issues and more become vital ingredients to Marder’s deftly-handled morality play, Sound of Metal serving as vital advocacy for the Deaf community while being an awe-striking drama in its own right. Ahmed’s an absolutely unstoppable performer, deep wells of discipline and commitment coming out in a performance of passionate intensity and wounded vulnerability.

At its core, though, Sound of Metal is a film about loss and grief, and what we do with ourselves when our lives change irrevocably. Some of us bang on, pretending it’s not happening at all or doing whatever we can to recapture what was. The rest of us — the wise ones — claw our way through to acceptance and learn to look at ourselves and our worlds in a different way.

Where’s It Streaming? Sound of Metal blows your eardrums off and leaves you to reinvent yourself on Amazon Prime Video on December 4th.