Hatebreed’s Jamey Jasta on Weight of the False Self, Adjusting to the Pandemic, Podcasting, and More 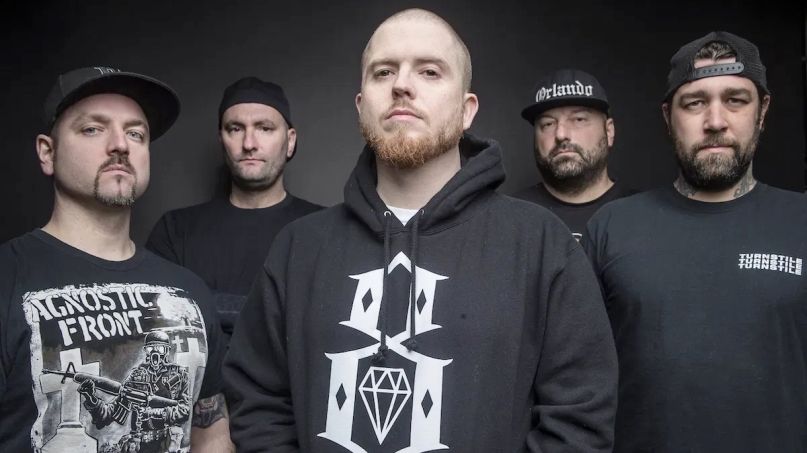 Like many musicians, Jamey Jasta thought he had his 2020 plans set. He was gearing up to release a new album with Hatebreed in the spring, plus the band had two tours booked with the likes of After the Burial, Havok, Creeping Death, Parkway Drive, Knocked Loose, and Fit for a King.

Then, COVID-19 hit. Right as the band was set to begin promoting their new album, the concert industry shut down, and the album’s release date was pushed back indefinitely.


Now, Jasta and Hatebreed are set to unleash their eighth LP, Weight of the False Self, on November 27th via Nuclear Blast Records. The album is one of the veteran Connecticut metal outfit’s most aggressive to date, with heavy riffing and powerful themes of self-reflection, loss, and the state of the world.

While the concert industry remains shut down, Jasta has kept himself busy with his popular “Jasta Show” podcast, which has taped more than 500 episodes since he launched it back in 2014.

He recently checked in with Heavy Consequence to speak about Weight of the False Self, his longstanding podcast, the state of the music industry, what he’s been up to during quarantine, and more. Read the full interview below, and pre-order Hatebreed’s new album here.

It’s very aggressive, and we thought about that towards the end of making the album, too. I think that’s why we put “Cling to Life” on there and why I made that sort of a focus track, just to try to break up the overall force of the record. We changed the tracklisting towards the end and the sequencing, too, so with “Cling to Life” on there, I think it broke up that force. It’s more of like an introspective song, not really like an angry song so it was a nice breath of fresh air while the rest of the album is pretty ripping. But, as for being heavy, [producer] Zeus was part of that. And I kept saying, “I want to just sound like a maniac on this,” and he’s like, “Really?” And I said, “Yeah, I don’t care. I just want to really scream my head off.” We just kept doing a lot of different tracks and vocals and changing the tone. I’m kind of leaning towards the heavier stuff. I know people say that bands, especially heavy bands, lay off the gas later on in their career, but I really wanted to put our foot on it this record.

It was unfortunate, because I was in L.A. in March, and we had all these big promotional things booked, and they just started falling to the wayside one by one. My daughter has respiratory issues and has had them since she was little, and I thought, I have to get home. I don’t want to be exposed to anything, and it’s already such a risk to just to be out here in public places and to be going to all these meetings and having to shake hands. Luckily, everyone was understanding, so I left. When I got back, I quarantined at this hotel and kind of mourned the release of the record, because I knew everything was going to get shelved. I was trying to stay hopeful. But, during those four days that I was quarantined in a hotel, so many tours started to get canceled. This is right in the peak of the hysteria in March, before all the hospitalizations and the deaths started to ramp up. When I got home and started getting settled in, I started thinking, “Okay, this is my new life.” I’ve never been off the road this long. I’ve never felt that my house was my home. It was just sort of like a place that I went to between tours.

If people don’t know that it was recorded prior, they might think it’s a reflection of the times, so all I can do is go out and talk about what the songs are about. There are positive songs on there, and then there are songs that are a little more pessimistic. The song “Let Them All Rot” was me sort of thinking about the big corporations and the big politicians and how they look at us, the little guy, the working people, and it’s what I feel is being said to me as. So, if someone was to ask about that and ask about why I have a song like that during all this, I would say, think about it from both ways. Think about it from both perspectives. I love a good angry song, but I don’t want the negativity to be aimless. I want people to walk away looking inward and either saying, “Okay, well, how can I find a solution? How can I better myself?”

That one brought the addition of some dynamics that you don’t normally hear from us. Even though it was about something that was really horrible that had happened in my life, and this person wasn’t able to survive, I had to tell two stories. So, I broke it up into the two verses, and I told the story from two different standpoints. This could be me talking to myself because life goes on. Even when you go through a tragedy, if you fall into that nihilism and you fall into that despair, how you’re not helping yourself. You’re not helping anyone by giving up. You have to really listen to the lyrics and listen to what I’m saying. I say, “Reach out, and never let go.” So, if there’s a light at the end of the tunnel or something positive to latch onto, that one positive thing you follow. Like, I follow a lot of authors. I follow a lot of musicians. That could be the light.

On his thoughts on when concerts can return in earnest

I don’t have any idea yet, but that’s a hard thing to be optimistic about. I’m pretty pessimistic with that. And, I’ve been going so hard with podcasting and with other aspects of the business and starting a new company, starting a new label and a new merged company and stuff, that I’m really not banking on touring coming back. If it does come back, I don’t think it’s going to be soon at the level where it can be profitable. I don’t know how many bands are going to want to take that risk financially and just with their health. Also, I feel like it’s a good time to look inward and gain different skills and try new avenues and do different things. We were already in a very oversaturated touring climate. I mean, really oversaturated, where you would go to one city, and you could go to any city in America, and there would be four or five other shows that night, often in the same genre.

I think for the music podcast, it’s definitely that people are a little more laid back about having these long-form discussions and expressing ideas and talking through ideas and opinions, which is good. Some people, I think, were really scared of it early on. I mean, I had to not put out entire episodes based on some stories that were told or things that people said, but I appreciate that people are a little more fearless now and, dare I say, even willing to lose some fans. Because once you hear the inner workings of stuff, once you see behind the curtain, sometimes it is a turn off.

If you look at someone who was very polarizing, like Ted Nugent, he was always doing these long-form interviews and giving journals a lot of time and expressing opinions that could lead to less album sales or alienating fans and stuff. But, he did it because that’s who he was. And he was trying to be his true self and be authentic. And whether you like him or not, he’s putting himself out there, which a lot of people are afraid to do. As a podcast host, you want more artists to be like that — not necessarily what he’s doing or what he’s promoting, but just to be authentic and true.

On how his podcast has complemented what he does with Hatebreed

It’s definitely helped me connect with people all over the world in a different way and has helped me connect with different fandoms. We’re all, as musicians, as creative people. We’re all being brave to a certain extent by putting our art out there for public scrutiny. The same goes with podcasting. It’s not necessarily art, but it’s a discussion that’s public that then leads to either a connection or a disagreement. I’ve found since the podcasts came out, our meet and greets have been well attended to the point that I would say they’re even two times or three times what they were previous to having the podcast. We have so many people wanting to chat about the show and wanting to chat about other stuff they know.

I’ve been producing a record this whole time. It’s been a real labor of love, and I’m really excited about how it’s turning out and working with this artist. So, it’s going to be kind of a co-production that I’ll probably put out on my own label, as well. I can’t say who it is just yet, but it’s a very popular artist who I’ve been wanting to work with for a long time. So, that was something that really kept me optimistic and grateful and staying in that sort of mindset — that attitude of gratitude that I needed throughout all this bad news. I’ve also been working on a Jasta record. It’s not completed, but the majority of it is written. I was going to call it the “Quarantine Chronicles”, but I don’t know. I’m bouncing off different ideas.

On the future of the music business

I do see everything sort of switching over to being more recording-centric instead of touring-centric. So, I’m going to just keep trying to tap that — to catch that wave of inspiration. It’s been hard, but if there’s 24 hours in the day, there’ll be a 20-minute period where I can tap into something. Even if I get four lines or two riffs or one drum beat or something, and then whoever I’m collaborating with can add something to the recipe, at least I get the idea down. I’ve had that happen where I’ll get a bunch of stuff down and it’ll sit on a hard drive and then eventually it comes out and I’m really happy with the end result. Then, I think, okay, you had all that anxiety and pressure and stress, and you thought nothing was going to come of it, but then you ended up with this.

Our thanks to Jamey Jasta for taking the time to chat with us. Hatebreed’s new album, Weight of the False Self, is available for pre-order here.