Stardust flopped hard, but Selena: The Series hints at new opportunities for the genre 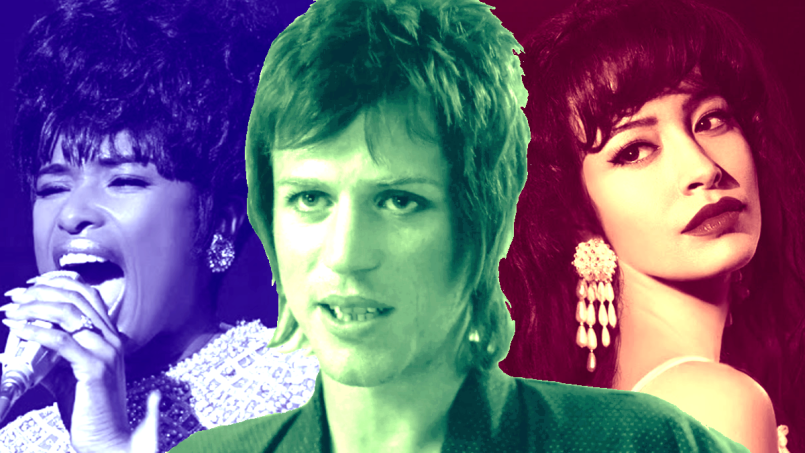 This past week saw the release of Stardust, a biopic about David Bowie’s first trip to the United States. If you’ve seen any piece of media related to the film, you probably know that the movie was received poorly — to say the least. This isn’t surprising, though. When the film’s first trailer dropped months ago, the film was immediately scorched online for being a very blatant and very poorly executed attempt to piggyback off the recent success of other musical biopics such as 2018’s Bohemian Rhapsody and last year’s Rocketman. Whereas those two films at least had the wherewithal to secure the rights to their stars’ likeness and discography, Stardust opted out of either of those things. Even so, the film chugged along on the strength of its premise alone, but mostly because it’s a musical biopic, and Hollywood sure loves its music history.

Make no mistake. This isn’t a new obsession. Studios have been doling out musical biopics long before Rami Malek and his fake teeth won best actor at the 2019 Academy Awards. Dating back to the 1940s, we’ve seen the music industry’s most iconic stars placed on celluloid: Woody Guthrie (1943’s Bound for Glory), Cole Porter (1946’s Night and Day), Kalmar and Ruby (1950’s Three Little Words), Glenn Miller (1954’s The Glenn Miller Story), Franz List (1960’s Song Without End), Fanny Brice (1968’s Funny Girl), the Trapp family singers (1965’s The Sound of Music), and you get the point. The list goes on and on from there — be it Kurt Russell as Elvis, Jennifer Lopez as Selena, or Joaquin Phoenix as Johnny Cash — and the list will continue long after Stardust.

Biopics on Aretha Franklin, Gucci Mane, Amy Winehouse, and yet another go at Elvis are all expected to hit the screen over the next couple of years, proving that Hollywood remains hellbent on heaving through music history. But what is it about the plight of a famed musician that’s worth telling over and over and over again? Well, it’s simple: biopics have a built-in audience. If you were to mention the title of a movie, nearly anyone you asked, even if they weren’t a fan of that musician specifically, would be able to say “Oh, Biopic Title X? That’s the <insert name of artist> movie, right?” It’s easy intellectual property that guarantees an automatic audience, which means studios don’t have to sweat too much about their films not making back the investment. After all, said artist’s chart-topping record sales have already ensured that the general public is interested in knowing more about them.

From a less money-centric perspective, though, the story of famous (and often tortured) musicians can be rewarding — quite literally. Look, it’s no secret that films about Hollywood or the behind-the-scenes process of filmmaking frequently find success come awards season. Once Upon a Time in Hollywood, La La Land, and Birdman are just a few of the many recent films that fared incredibly well at the Academy Awards. The music industry is only a hop, skip, and a jump away from Hollywood. What’s more, biopics, though often rooted in truth, also tend to follow the same beats as the aforementioned Oscar-bait films about filmmaking. Traditionally, they capture obscenely wealthy and famous celebrities trapped and tortured by the prison of fame.

It’s a winning formula that keeps on giving (see: Bohemian Rhapsody and Rocketman), but it’s also one that’s easy to fumble. Sometimes it’s a poor script, sometimes it’s an error in casting, sometimes it’s a lack of comprehension, and sometimes it’s all of the above (as Stardust has certainly proven). There’s also the cache of catch-22s to consider with the trickiest being the involvement of the artist itself. Sure, the artist’s approval grants access to all sorts of IP and — most importantly — the music itself. However, it all too often leads to a mess of red tape — from the estate, the label, and the artist itself — all of which can cause deviations from the truth that will undoubtedly taint the story. It’s a conundrum that every filmmaker must contend with and one that only a few have successfully managed to dance between over the years.

2007 gave us two critically-acclaimed biopics, both of which took drastic liberties in storytelling, and with great success. Anton Corbijn’s Control examined the life of Joy Division frontman Ian Curtis, and nabbed praise from both critics and its band members alike, even despite the fact that drummer Stephen Morris noted that “none of it’s true really.” At the time, Morris’ contended that the fudging of the facts served the narrative of the film because “the truth is too boring”, which perfectly describes the mindset behind Todd Haynes’ Bob Dylan biopic of that same year, I’m Not There. The film sees six different actors embodying facets of Dylan’s personality — a massive leap from reality, but one that clearly allowed for more exploratory filmmaking. And despite Elton John’s heavy involvement in the project, the same case could be made for Rocketman, which featured frequent fanciful interludes that had no basis in reality but cemented the film’s sense of self, winning audiences over.

Alas, the biopics keep coming — and they always will — but there are a few intriguing shakeups ahead. Selena: The Series, for instance. Netflix’s forthcoming mini-series event will tackle the life and career of Tejano icon Selena Quintanilla over nine whole episodes. By stretching out its runtime, the series should, in theory, be able to examine the subtle nuances and smaller moments in Quintanilla’s life that the aforementioned feature film had to cut or leave out. By that same token, it should also afford more dramatic character arcs, making for a more impressionable experience. Seeing how this approach has worked wonders for Ryan Murphy and his American Crime Story moniker, it’s possible this medium could do the same for the musical biopic.

Thinking aloud, the jump to television opens up a whole new world of creativity and opportunity when it comes to storytelling. The genre could experiment with anachronistic storytelling, time jumps, and setting entire episodes in flashback. Shows could also experiment with mixing in real-life figures from their subject’s lives, or even incorporate documentary-style filmmaking a la HBO’s seminal series Band of Brothers which, despite the heavy involvement of its subjects, still wrapped the facts with fiction.

At the very least, the pivot should give Hollywood another outlet for its obsession. Because again, these adaptations aren’t going anywhere — no matter how many missteps they keep taking and no matter how many more Stardusts we see slapped on screen. “If you build it, they will come,” as the saying goes, and as long as audiences keep singing the songs, Hollywood will keep having reasons to tell the stories behind ’em.

Ah, the gift of sound and vision.