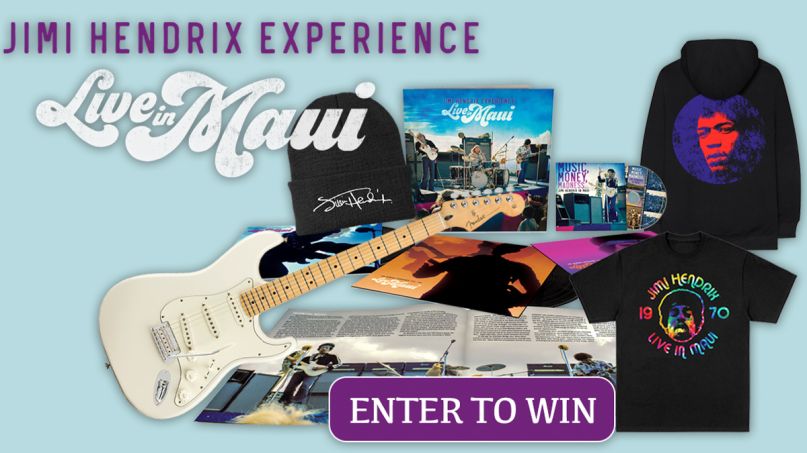 In the summer of 1970, Jimi Hendrix was set to play a concert in Honolulu, Hawaii. At the same time, his manager, the controversial Michael Jeffery, was trying to film a now-infamous movie called Rainbow Bridge. Desperate to make something watchable out of the film’s nonsensical “hippie excess,” director Chuck Wein convinced the Jimi Hendrix Experience to play a free concert on the side of a dormant Maui volcano. The audience sat on the ground, arranged by astrological sign, and Hendrix took to the makeshift stage to deliver two impeccable sets against an unparalleled tropical backdrop.

40 years later, the full volcano concert is being presented in the Live in Maui vinyl box set. Alongside the collection’s three LPs is a Blu-ray of the new documentary Music, Money, Madness… Jimi Hendrix in Maui, which recounts the whole wild story of Rainbow Bridge and Hendrix’s performance. The set is out November 20th via Experience Hendrix, L.L.C. and Sony Legacy Recordings — but before they even drop, we’re giving you a chance to win them both.

We’re giving away one (1) copy of the Live in Maui box set, including the Music, Money, Madness… Jimi Hendrix in Maui documentary. Oh, but it gets so much better: We’re including a Fender Stratocaster in Polar White, plus a grip of Experience Hendrix merch including a T-shirt, sweatshirt, and beanie.

To win it all, simply enter using the widget below. (Note: If you’re having trouble seeing the widget, you can enter here.) The giveaway is open to residents of the US and Canada only, and requires entry into both the Consequence of Sound’s and Sony’s Hendrix newsletters.