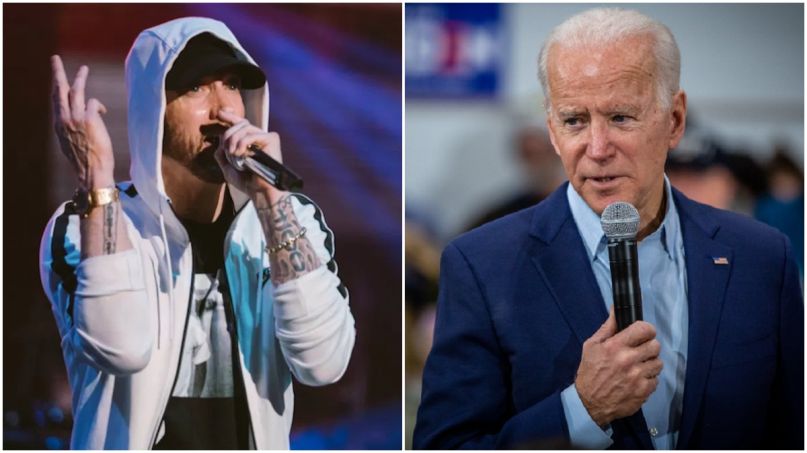 Eminem (photo by Natalie Somekh) and Joe Biden (photo by Phil Roeder, via the National Archives and Records Administration)

In the final days of the 2020 presidential election, Joe Biden has decided to tug at the millennial heartstrings and use Eminem’s legendary hype song “Lose Yourself” in an official campaign ad.

Eventually, some slow-motion clips of Joe Biden walking and a big “VOTE” message enter the fray, but the majority of the video feels more like a Nike commercial than a presidential campaign ad. If nothing else, it’s a great reminder that “Lose Yourself” is an evergreen pump-up jam. Check it out below.

Licensing this song may be Eminem’s way of endorsing the former vice president, but the Grammy-winning rapper has already made his opinions on Donald Trump quite clear. There was that infamous BET Cypher in 2017 in which he considered dropping an “awfully hot coffee pot” on Donald’s head (and then received a visit from the Secret Service). He also told Billboard that “a fucking turd would have been better as president”.

Fortunately, Eminem is still here to lend “Lose Yourself” to Joe Biden in the first place. Earlier this year he caught a home intruder in his house who allegedly said that he was there to kill him. In less scary news, Slim Shady also guested on the recent Big Sean album and offered up his list of the greatest rappers of all time.