John Cleese Defends J.K. Rowling with His Own Transphobic Tweetstorm 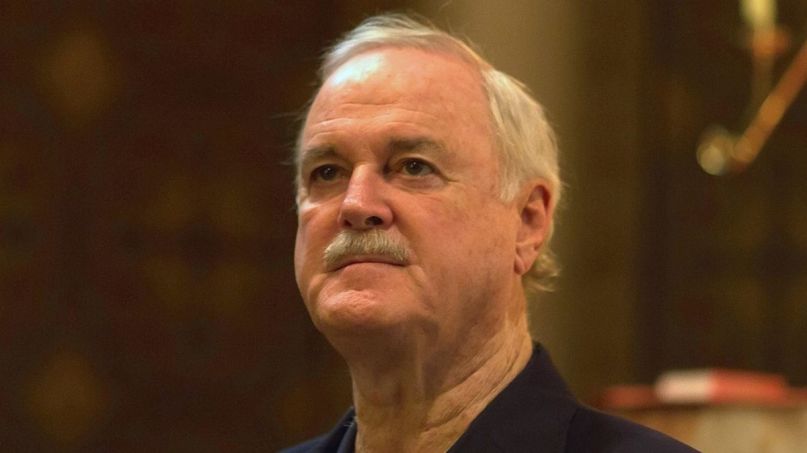 John Cleese has some donkey-brained takes on transgender people. On Sunday, the 81-year-old Monty Python actor went on a tweetstorm of callous transphobia and cringey old man musings on wokeness that culminated with him saying: “I’m afraid I’m not that interested in trans people.”

It all started when a Twitter user asked Cleese why he decided to publicly sign a pledge of solidarity with inveterate transphobe J.K. Rowling for her right to continue saying egregiously transphobic bullshit. Cleese replied with a glib taunt, and then proceeded to quote-tweet a handful of replies with increasingly offensive and low-brow attempts at humor to justify his disinterest in the struggles trans people face in our society.

What would you like me to tell, Mr Joughin ? https://t.co/EHAb2oCPBV

When someone asked him, “Why the fuck can’t you just let people be who they want to be?”, Cleese replied with: “Deep down, I want to be a Cambodian police woman. Is that allowed, or am I being unrealistic?”. That’s the type of dehumanizing and utterly unfunny trollishness that right-wing dickheads like Charlie Kirk and Steven Crowder have built their brands on, so it’s pretty sad to see Cleese stoop to that level.

Deep down, I want to be a Cambodian police woman

Is that allowed, or am I being unrealistic ? https://t.co/oGPwEWJM9a

Even sadder, though, is that he didn’t stop there. When someone asked him to be upfront about his thoughts on Rowling’s position on the trans community — which includes the erasure of non-binary people and the conspiracy that trans people are negatively influencing our children — Cleese tried to explain that his disinterest in trans folks comes from a place of higher moral standing.

“I just hope they’re happy and that people treat them kindly,” he tweeted. “Right now I’m more focussed on threats to democracy in America, the rampant corruption in the UK, the appalling British Press, the revelations about police brutality…”

I'm afraid I'm not that interested in trans folks

I just hope they're happy and that people treat them kindly

Right now I'm more focussed on threats to democracy in America, the rampant corruption in the UK, the appalling British Press, the revelations about police brutality… https://t.co/y6l33FBQNL

Sending shallow well-wishes to trans people after cosigning Rowling’s pseudo-academic demonization of them, mocking them with the language of a 16-year-old 4chan poster, and then saying that you’re “not that interested” in the struggles they face is a particularly stinging slap in the face. But to then say that you’re interested in more important issues like the crumbling of our democracy and police brutality — as if the party threatening our democracy isn’t pushing a heinously transphobic agenda, and trans people of color aren’t disproportionally targeted by police brutality — is just downright asinine.

Then came the anti-wokeness, which is the old white dude way of dog-whistling your perceived God-given right to say whatever the fuck you want with no repercussions, and if what you say is explicitly insulting to a marginalized group of people, then they should just deal with it because blanket free speech in comedy is more important than a population’s basic human dignity. Cleese brought up the “W” word when a self-proclaimed “free speech advocate” dingbat replied with a tweet comparing social justice advocates to gulag operators.

It's the complete lack of perspective that bothers me

Of course, that goes with a complete lack of a sense of humour

Another poster asked Cleese what happens when we as a society lose our sympathy, and the Emmy winner replied by reassuring us that he’s sympathetic toward everyone but “wokes.” “I hope they fry in their own sanctimoniousness and narcissistic posturing,” he tweeted.

Oh I do sympathy and support all the time, for most of the Third world. Except for Glasgow, of course

I exclude all wokes, of course. I hope they fry in their own sanctimoniousness and narcissistic posturing

Until they get a sense of perspective, that is… https://t.co/yfzfWDx7Az

Here, Cleese seems to be equating “wokes” with people who care about trans issues, so his defensive offering of “sympathy and support” essentially means nothing. From Fawlty Towers to boilerplate right-wing provocation is a pretty big fall from grace. At least Stephen King will be on the right side of the Rowling-induced transphobic shitstorm.