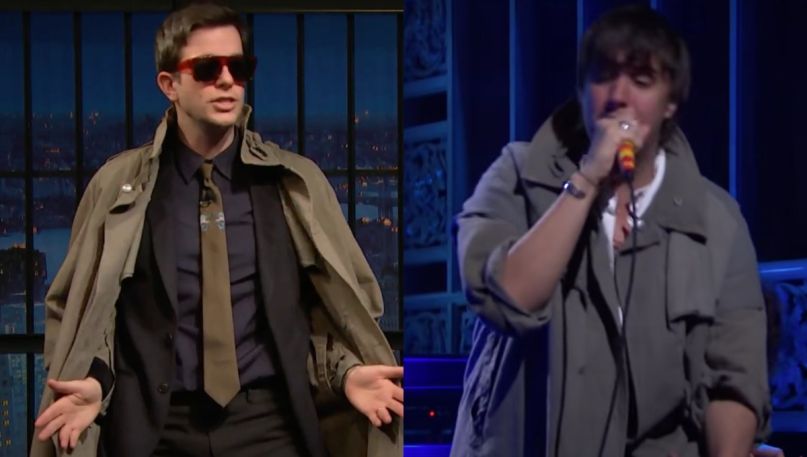 John Mulaney returned to host Saturday Night Live on Halloween this past weekend, and he walked away with perhaps the coolest Julian Casablancas costume. Well, sort of. The Strokes served as the evening’s musical guest, and after wrapping up the episode, the frontman gifted Mulaney the same hip trench coat he wore during the band’s performance.

The stand-up comedian relayed the fashion anecdote during a lengthy and super entertaining interview on Late Night with Seth Meyers that aired on Monday. He also wore the coat for the entire duration — that’s over 20 minutes! — of their chat.

As Mulaney told it, it all started when he noticed Casablancas sporting a neat Knicks jacket while shooting SNL promos. “I said, ‘That’s a really cool jacket, I gotta get that jacket,'” Mulaney recounted. He said he did so hoping that Casablancas would tip him off on where to purchase one for himself. “But that didn’t happen, that’s alright,” a jokingly dejected Mulaney commented to Meyers.

“So after the show, he came into my dressing room and was like, ‘So you want a jacket?’ And he gave me this one. And he gave me a leather jacket,” said Mulaney, as he pointed to the jacket. “But… there’s nothing I can do with this,” he added, standing up to show how loosely it fit, almost like a cape. “But I enjoy it so much… it’s so meant for a lead singer.”

At 1 am, when the night couldn’t possibly get any better, Julian gave me his trench that he wore onstage and I acted like I wasn’t crying.

But the Casablancas wardrobe fun didn’t stop there. “When I got home, I looked through the pockets and I found these,” remarked Mulaney, as he pulled out a pair of stylish reddish-brown sunglasses from a pocket and put them on. “I texted him a photo and said, ‘Hey, you left these, do you want me to have someone drop them off?’ He said ‘you keep them, man.'”

Mulaney said he later wore both the coat and sunglasses and reveled in his certified Strokes ‘fit. “To come down from the show, I just stood and stared at myself in the mirror and I was so happy.”

If you’re able to pull it off — I’ve tried and I cannot — the look is certainly chic as hell. But there’s also a very silly side to the outfit, as Meyers quipped. “You look like a kid in a teen movie, like it’s his first time at a party.” Mulaney laughed and conceded, and even likened himself to Whistler from the 1992 film Sneakers.

Watch Mulaney’s entire interview with Meyers via the two videos down below, especially if you intend on staying sane this Election Day. The trench coat discussion begins around the 1:40 mark of the first clip.