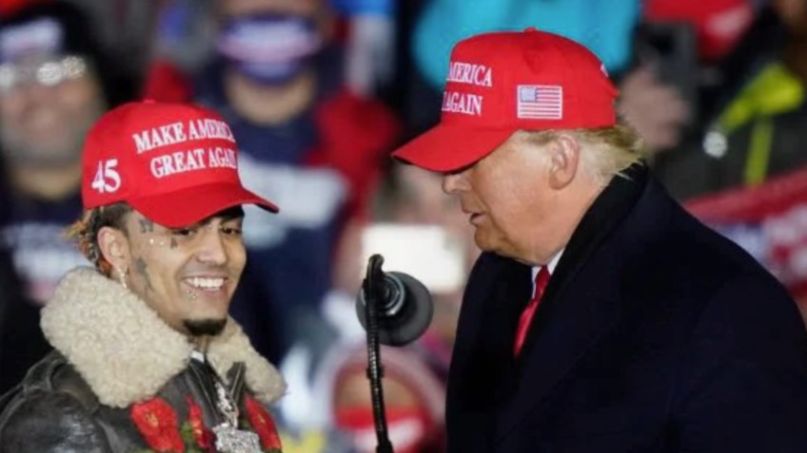 As Lady Gaga stumped for Joe Biden in Pittsburgh, Donald Trump countered with his own “celebrity” endorser. During a rally in Grand Rapids, Michigan on Monday night, Trump was joined on stage by Lil Pump.

The Harvard Dropout rapper came out in support of Trump last week, after apparently learning of Biden’s plan to tax individuals making over $400,000 a year. “Fuck I look like payin’ an extra 33 in tax for Biden, bitch ass n*gga? Fuck Sleepy Joe, n*gga! Trump 2020, bitch,” he yelled in a clip posted to social media.

Word apparently got back to the reality show president, who’s always on the lookout for a new attraction for his “COVID-19 Superspreader World Tour”. Of course, neither man bothered to do one iota of research on the other before taking the stage together.

Trump introduced Lil Pump as “Little Pimp” and described him as “one of the big superstars of the world” (he hasn’t had a charting song in over two years). Meanwhile, Lil Pump thanked Trump for “[bringing] the troops home” (which isn’t true). “You’re doing the right thing,” Lil Pump added, “MAGA 20, 20, 20. Don’t forget that.”

The whole thing would be hilarious if not for the fact that it’s indicative of just how easy it is to get into Trump’s orbit. Say something nice about Trump on TV, regardless of motives, and next thing you know you’re standing next to him on stage on the eve of the most important election in modern history. Hell, the mere fact Lil Pump falsely lauded Trump for bringing home the troops probably puts him in contention to be the next Defense Secretary. Meanwhile, Lil Pump got the 15 seconds of fame he’s been clinging for ever since his latest album proved to be a giant flop.

Truly, we live in the dumbest timeline.