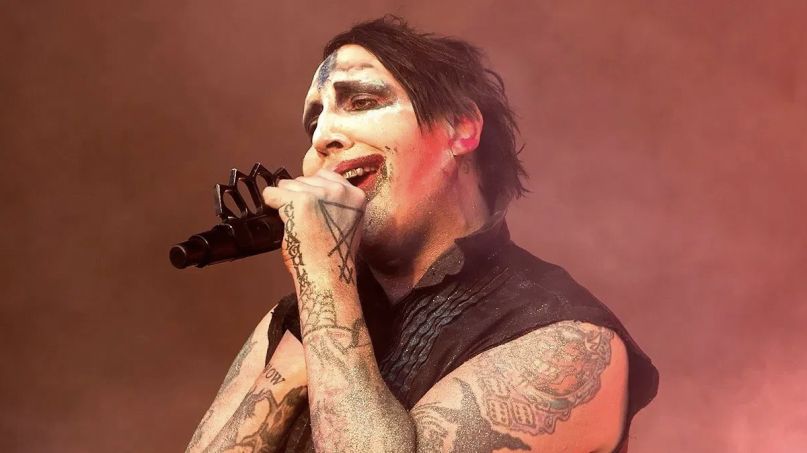 Marilyn Manson’s publicity team has released a lengthy statement addressing the singer’s former relationship with actress Evan Rachel Wood. The statement comes after Manson hung up during an interview with Metal Hammer when he was asked about Wood’s 2019 testimony in which she revealed she was in an unspecified abusive relationship.

The allegations stem from Wood’s testimony before California senators last year during the creation of the Phoenix Act, which extends the statute of limitations on domestic violence felonies from three to five years. Without naming anyone specific, Wood described an abusive relationship with an older man when she was 18 — around the time she was known to have dated Manson, who was 36 at the time.

After Manson cut the interview with Metal Hammer short, the news outlet sent his UK publicist 10 questions related to his relationships with Wood and other women, with hopes that Manson would answer.

Among the points they brought up was a 2009 interview with Spin, in which Manson appeared to acknowledge a tumultuous relationship with Wood. Metal Hammer also cited the song “Perfume” from Manson’s latest album, WE ARE CHAOS, particularly the lines, “So you wear your damage on your sleeve…Cause victim is chic/ You’re as famous as your pain.”

The answers to Metal Hammer‘s questions came in a statement from Manson’s PR team, not directly from Manson. It cites positive comments apparently made by Manson’s other ex-partners and admonishes the interviewer for blowing only “one of only two interviews granted in the UK” with Manson.

“Personal testimony is just that, and we think it’s inappropriate to comment on that.

You then go on to talk about Manson being accused of ‘terrible things’ by unnamed ‘critics’ but offer no guidance on who these critics are and what these things are, so it’s not possible to comment.

You then mention Mickey Rourke. It is my understanding that Evan Rachel Wood dated multiple people around the time she was dating Manson. Basic internet research will give you a host of other names that have not come up in any of our discussions.

Your next couple of points deal with comments Manson made in Spin magazine in 2009. Your confusion around the timeline of this is extremely worrying. The comments in Spin where Manson had a fantasy of using a sledgehammer on Evan and he cut himself 158 times was obviously a theatrical rock star interview promoting a new record, and not a factual account. The fact that Evan and Manson got engaged six months after this interview would indicate that no one took this story literally.

You go on to talk about Manson commenting on sexual harassment, Me Too and specifically the experiences of his ex partner Rose McGowan. These are all issues that Manson has publicly addressed and are available online. Please see Channel 4 interview from 15th December 2017.

Manson has never shied away from public comment – equally he does not have to make the same comment twice.

There will be no further comment on specific songs. Your journalist had the opportunity to ask Manson about his music – one of only two interviews granted in the UK – and he chose not to. Trying to weave one section of one song from an artist with a 30 plus year career to fit a narrative is both disingenuous and troublesome.

You mention Manson’s ex fiancée Rose McGowan in your questions. Rose is one of the bravest and most outspoken figureheads of the Me Too movement. Manson remains friends with McGowan and she talks very fondly of their three a half years together. There are multiple sources worldwide. I link to a Washington Post article on McGowan’s memoir Brave.

You fail to mention Manson’s ex-wife Dita Von Teese, who remains good friends with Manson. Quoting from a Female First article published in 2018, ‘Dita admits she has been ‘lucky’ to avoid any abusive episodes in the entertainment industry in her career.’

There are also numerous articles over multiple years where Evan Rachel Wood speaks very positively about her relationship with Manson. In NetAPorters.com’s The Edit: ‘I wouldn’t trade any of [our relationship],’ Wood told the mag. ‘I appreciate everything he taught me. I just don’t think we were right for each other.’

Finally you talk about death threats. Manson knows all about those – he has had many. He has spent his career being blamed for everything from Columbine to teenage suicide. Unfortunately, we live in a time where people believe what they read on the Internet, and feel free to say what they want with no actual evidence. The effects can be catastrophic and promoting non fact based information is wholly irresponsible. All we can try and do, as the media and individuals, is to use facts and truth and not hide behind gossip and conjecture to further our own agendas.”

The statement comes on the same day as the 20th anniversary of Manson’s 2000 album, Holy Wood (In the Shadow of the Valley of Death). The singer wrote and recorded that album in the wake of the 1999 Columbine High School massacre, during which time he was demonized when it was initially reported that the shooters listened to his music. Manson’s most recent album, WE ARE CHAOS, was released in September of this year.