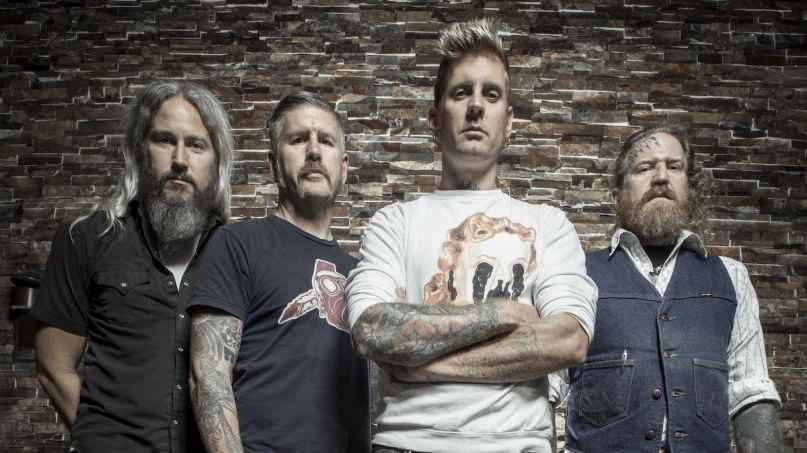 Armed with more than 30 newly written songs in their arsenal, Mastodon have officially entered the studio to record a new album. In addition, the acclaimed metal act performed a five-song set for the virtual Adult Swim Festival on Friday night (November 13th).

Mastodon had originally hoped to begin work on a new album in early 2019, but tabled those plans when they were presented with the opportunity to do a 10th anniversary tour in support of 2009’s Crack the Skye. When we caught up with drummer-vocalist Brann Dailor a couple months ago, he told us the band had a plethora of new material.

“Fortunately, or unfortunately, we’ve added to the pile, so now there’s like 30 or 35 songs,” Dailor mentioned to us over a video Zoom chat. “We’re really zeroing in on the stuff that’s definitely gonna make the album.”

Now, after a few delays, Mastodon have finally entered the studio to record the follow-up to 2017’s Emperor of Sand. The band posted drummer’s-eye view of their studio Friday on Instagram, with the caption, “Guess what’s happening?”

With Mastodon ready to lay down new tracks, the band got the musical juices flowing with a five-song set that streamed Friday night as part of the virtual Adult Swim Festival.

The performance kicked off with the live debut of the Once More ‘Round the Sun track “Asleep in the Deep”, which they had never played in concert before. The rest of the set included “Thickening”, “Steambreather”, “The Motherload”, and “Blood and Thunder”.

During the wait for a new studio album, Mastodon gifted fans with the career-spanning compilation Medium Rarities, which contains the new song “Fallen Torches”. They also contributed the new track “Rufus Lives” to the recent movie Bill & Ted Face the Music.