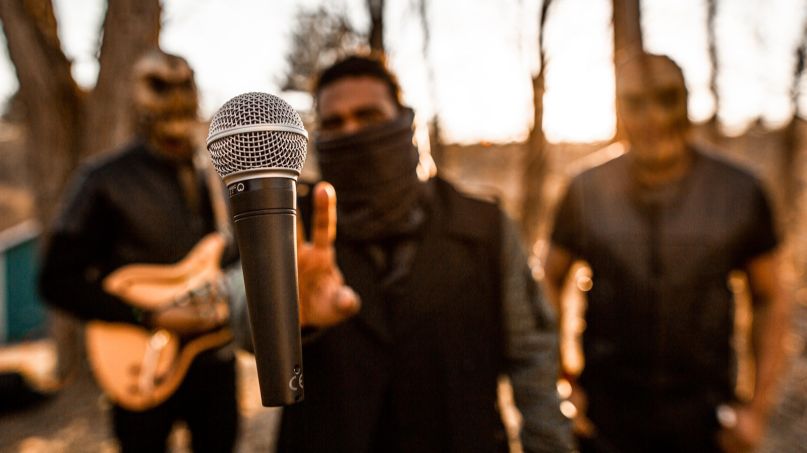 Underground rap king Pharoahe Monch has formed the new group th1rt3en with guitarist Marcus Machado and drummer Daru Jones. Their first album, A Magnificent Day for an Exorcism, arrives January 22nd, and the trio has offered a preview with “Fight” featuring Cypress Hill.

Monch has been a favorite of hip-hop heads since the 1990s, when his machine-gun flows bolstered the duo Organized Konfusion. Now, he’s joined forces with Machado, a former child prodigy who’s performed with Anderson .Paak and Pete Rock, as well as Jones, who’s handled drums for Jack White.

Together, they specialize in a fusion of rap and rock, with Machado’s guitars providing a searing counterpoint to Monch’s lyrical assaults. In “Fight”,  they use those sounds to face down the epidemic of police brutality. It opens with Jones rattling off a military tattoo, before Machado unleashes a descending guitar riff. Cypress Hill gives the sad saga of violence a nursery rhyme twist, rapping, “This little piggy killed a minor/ Same piggy got paid to stay home.”

In a statement, Monch spoke about the energizing power of anger. He said,

“The driving force behind ‘Fight’ is anger. Anger at a never ending saga that repeats itself over and over. My frustration with people not hearing the outcries, until the atrocities of the brutality have been recorded on smartphones. And still, the people allow their willful ignorance to support and protect America’s culpability. To me ‘Fight’ is equally as much a vibe, as it is a protest record.”

The video was directed by Tatjana Krstevski, and features th1rt3en and cohorts wearing masks and taking on the robed figures of the KKK. Images of flags and family are contrasted with flickering flames, and the visuals end with a scorching molotov cocktail. Check out “Fight” below.