Donations will benefit those affected by the tragic 2015 terrorist attack 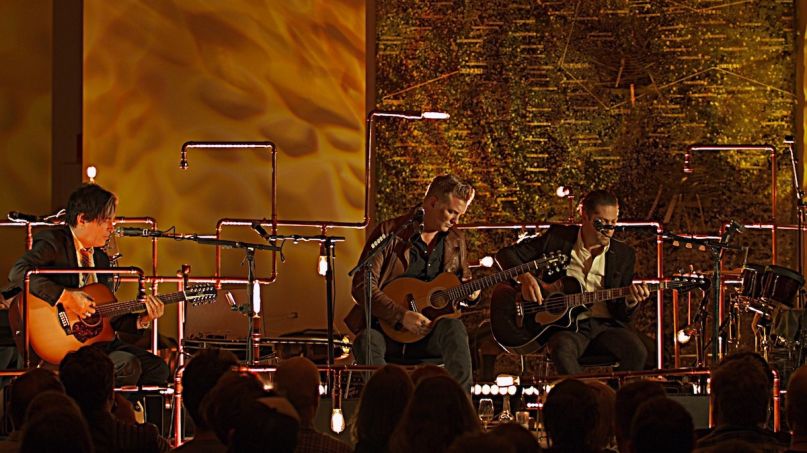 Queens of the Stone Age at Tasmania's MONA in 2018

This Friday, November 13th, will mark five years since the tragic Bataclan terrorist attack in Paris. A total of 89 people were killed during the concert headlined by Eagles of Death Metal. In remembrance of that fateful evening, Queens of the Stone Age will livestream previously unseen concert footage, and all proceeds will benefit those impacted by the attack.

Frontman Josh Homme made the announcement on Twitter on Monday. Homme is a member of Eagles of Death Metal, but didn’t perform at the 2015 Bataclan concert. Even so, he clearly hasn’t forgotten the gravity of what transpired that night.

QOTSA have chosen to livestream an acoustic gig that took place at Tasmania’s MONA (Museum of Old and New Art) in September 2018. The 11-song setlist included “Go with the Flow”, “I Never Came”, and covers of Dean Martin and Marty Wilde. The alt-rockers closed things out with their 2000 song “In the Fade”.

“This show was originally to benefit the Children’s Hospital of Hobart, Tasmania, and we’re pleased it has a second chance to do some good,” explained Homme. “2020 is a really messed up year, and people in need need you more than ever. Donate what you can, if you can.”

Donations will be split between two organizations, The Nick Alexander Memorial Trust and Life for Paris. The former is named after Nick Alexander, a band merch manager who was killed at Bataclan, and “continues Nick’s music-loving legacy by providing instruments and music equipment for disadvantaged communities across the UK”. The latter is a charity that provides support to victims of the Bataclan tragedy and the other terrorist attacks around Paris that day.

“Due to the current lockdown, victims and their families won’t be able to stand together in Paris during commemorations this year,” said Arthur Denouveaux, President of Life for Paris (via NME). “This show premiering on November 13 means our community will be together sharing the same music at the same time. This is the best testimony to the importance of the arts in challenging times.”

QOTSA’s MONA livestream premieres Friday, November 13th at 12pm ET over on the band’s YouTube page. It will be free to view, but as Homme noted, donations are highly encouraged.

The rockers were recently confirmed to play the 2021 Reading and Leeds Festival in the UK, their first public performance in three years. While the group as a whole has remained relatively quiet during the pandemic, Homme has popped up on various livestreams to cover The Clash, collaborate with Sharon Van Etten, and perform solo versions of QOTSA and Them Crooked Vulture songs.

QOTSA will broadcast previously unseen live footage from @monamuseum, Tasmania, in aid of @NickAlexanderMT & @lifeforparis charities. It will be available for a limited time beginning 9am (LA), 5pm (London) & 6pm (Paris) on Friday Nov. 13th.