Ranking: Every AC/DC Album from Worst to Best

The legendary band's discography is one of consistency, survival, and pure rock 'n' roll 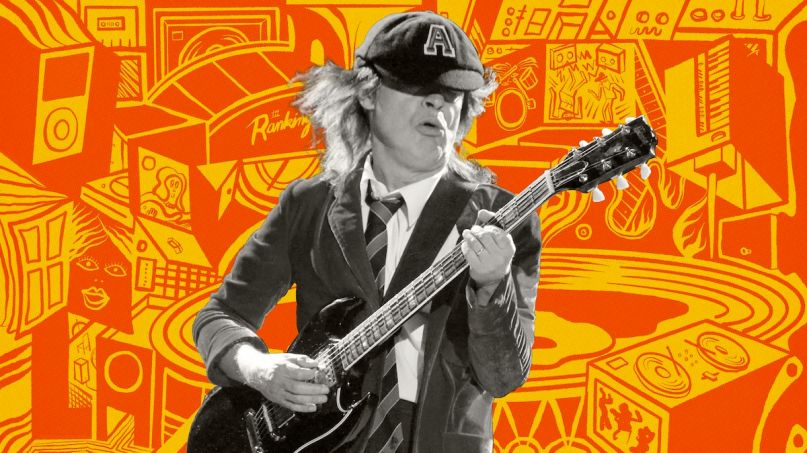 Welcome to Dissected, where we disassemble a band’s catalog, a director’s filmography, or some other critical pop-culture collection. It’s exact science by way of a few beers. This time, we follow the legendary AC/DC’s career, from their 1975 debut, High Voltage, to their most recent effort, 2020’s Power Up.

The legacy of AC/DC is one of perseverance. Across their five-decade career, the Australian hard rockers have seen both sides of tragedy and glory, from their rugged ascent playing beer bars to becoming a global stadium rock institution.

When charismatic frontman and lyricist Bon Scott passed away in 1980, many wondered if it was the end of AC/DC. Scott’s vivid personality was as much the face of the band as forever-a-schoolboy guitarist Angus Young. After releasing multiple soon-to-be classic albums with the singer, including the 1979’s iconic Highway to Hell, what would become of AC/DC?

In a blaze of triumph, the band returned with Back in Black just months later, arguably the greatest comeback album in rock history. Now singing was Brian Johnson, who proved just as charming and braggadocious as Scott, but with a gravelly vocal style distinctly his own. Stacked top to bottom with timeless hits like the riff-centric title track and “You Shook Me All Night Long”, it signaled the beginning of a new era of AC/DC and a prolific string of albums that continues to this day.

While it’s fair to say the band’s post-1980 output doesn’t always live up to alarmingly high quality of Back in Black, AC/DC still managed to remain relevant and release consistent hard rock throughout the decade and into the ’90s. Along the way, the band notched MTV hits like 1986’s “Who Made Who”, the inescapable combo of “Thunderstruck” and “Moneytalks” from 1990’s The Razors Edge, and the Rick Rubin-produced one-off “Big Gun”, which hit No. 1 on Billboard‘s Rock Chart in 1993. These songs introduced AC/DC to a whole new generation of kids eager to consume any and all forms of heavy music.

However, tragedy would again strike when Angus’ brother and the band’s imitable rhythm guitarist Malcolm Young died in 2017 after leaving the band in 2014 due to a battle with dementia. As of 2016, the members of AC/DC had gone their separate ways, with Johnson stepping aside due to serious hearing loss. However, in another act of revival, the band reconvened with classic members Angus, Johnson, drummer Phil Rudd, and bassist Cliff Williams, along with Stevie Young (who had stepped in for Malcolm) to record a new album, 2020’s Power Up. Their best album in 30 years, it’s a record that — like The Razors Edge — could be a new generation’s introduction to AC/DC.

With the band’s legendary discography on the mind, Heavy Consequence undertook the task of revisiting and ranking each and every one of AC/DC’s 17 studio albums, from the classics to the lesser known works. All of these albums mean something to anyone who’s eagerly browsed the AC/DC section at a record store.

As a note, in an effort to stay true to AC/DC’s own canon, we chose to include the Australian versions of High Voltage and T.N.T. — which adhere to the band’s artistic vision — rather than the arguably more visible international release of High Voltage (which contained many tracks from T.N.T.) We also omitted compilations like 1986’s Who Made Who, live albums such as If You Want Blood, You’ve Got It, and EPs (i.e. Jailbreak ’74). Formalities aside, let’s dig in.

For Those About to Listen (Analysis): There truly are no bad AC/DC albums. Because they’ve stuck to their lane and their chosen sound with remarkable consistency, their entire discography falls into various shades of good to great. But by the time of Ballbreaker, some exhaustion was starting to set in. The years between albums were starting to grow longer, and the group was leaning harder on the hits of the previous two decades when they played live. Yet, with the success of The Razors Edge and cheerleader and uber-fan Rick Rubin in their corner, there was some urgency to keep going even if the material they brought to the studio felt a little off.

Finding the missteps isn’t difficult. AC/DC has never been an overtly political band, so their attempts at social commentary with “The Furor” and “Hail Caesar” were ill-fitting. An attempt to recreate the slow burn of “The Jack” or “Ride On” resulted in the plodding “Boogie Man”. And though their lyrical metaphors for sex and women have never been terribly witty, they feel even more strained on “Love Bomb” and the discomforting “Cover You In Oil.” Rubin and co-producer Mike Fraser made the band sound better than ever, but the songwriting hampered their efforts.

Best in Black (Best Song): While the rest of Ballbreaker concerns getting laid or making some awkward jabs at conservative politicians, “Whiskey on the Rocks” returns AC/DC to a familiar location: their local watering hole. A celebration of booze in all its flavors and the good times that usually go hand-in-hand with a night of drinking, fused easily to a road trip ready rhythm.

Done Dirt Cheap (Worst Song): A song with the propulsion and spirit of “Love Bomb” deserves far better than what the Young brothers cooked up for Brian Johnson to sing. A dick-swinging ode to both heavy artillery and easy women that feels flaccid and awkward. You try singing “Where the size doesn’t matter/ Come long, short, or batter” with a straight face. — Robert Ham

For Those About to Listen: Alas, the late ’80s were not kind to AC/DC, and the primitive steam hammer rock sound that carpet-bombed the charts eight years earlier sounded quaint in 1988. Blow Up Your Video’s stiff retread of the band’s old tropes sounds arthritic next to the sexual nihilism of Guns N’ Roses or the militaristic rage of Metallica.

In another in a series of back to basics moves, AC/DC reinstated producers Harry Vanda and George Young (older brother of guitarists Malcolm and Angus) who had helmed the band’s earliest albums. The duo had their work cut out for them: drummer Simon Wright was on his way out, and alcoholism had a firm grip on Malcolm, who played a primary songwriting role in every AC/DC record until that point. Unsurprisingly, then, Blow Up Your Video struggles to find its footing. “Heatseeker” and “That’s The Way I Wanna Rock and Roll” pack a little punch, but beyond that it’s mostly forgettable – AC/DC rarely play any of these songs live.

Things picked up for the band after 1988. Malcolm kicked the habit during the subsequent tour, and AC/DC returned to form two years later with The Razors Edge, leaving Blow Up Your Video a transitional — and ultimately inconsequential — piece of the band’s history.

Best in Black: It’s a cliché at this point that AC/DC put their best song in the pole position on their albums and Blow Up Your Video is no different. “Heatseeker,” their first strike, delivers a straightforward but satisfying dose of what the band does well: a heavy main riff, satisfyingly screeching Brian Johnson vocals, and a nice pentatonic solo from Angus. As good as it is, like the rest of the record, it’s basically inessential.

Done Dirt Cheap: From a band as lascivious as Johnson-era AC/DC, one might expect a little slap and tickle fun from a song called “Ruff Stuff”. Sadly, it’s as vanilla as they come. More-or-less a retread of “You Shook Me All Night Long”, this middling semi-ballad feel like it’s about 50 percent chorus and, like many AC/DC songs, the chorus is mostly the title of the song itself. Swipe left on this one. — Joseph Schafer

Pick up Blow Up Your Video here.