Proceeds benefitted the metal icons' charitable All Within My Hands Foundation 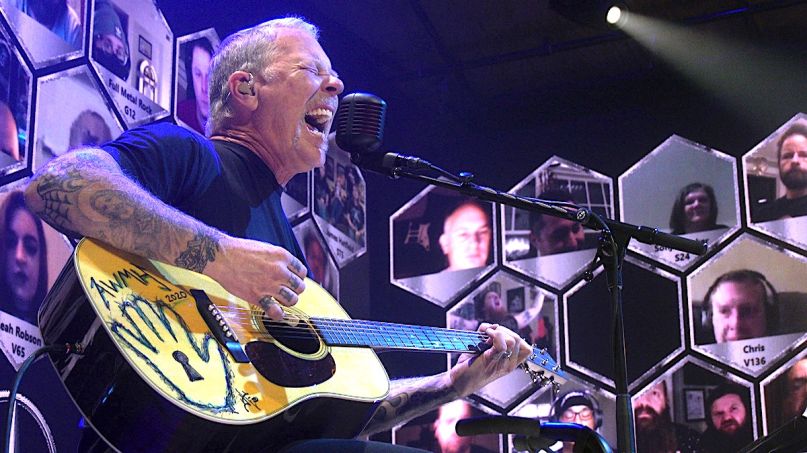 Setting the Stage: Besides being one of the biggest metal bands in the world for decades, Metallica are also one of the most charitable music acts around. Case in point, their All Within My Hands Foundation, which helps those in need throughout the world — providing food to the hungry and assisting with education. This year, the foundation has already donated nearly $1 million to COVID-19 relief and wildfire relief efforts.

On Saturday (November 14th), the band streamed a live performance from their own Metallica HQ in San Rafael, California. Dubbed “Metallica: Helping Hands Concert & Auction, Live & Acoustic from HQ”, all the proceeds from viewers who bought virtual tickets (as well as via donations and auctions) go to the aforementioned foundation. While Metallica are best-known for speedy, chugga-chug-chugging riffs and high volume, they have also always had a more serene side to them – and have never been bashful to strum the acoustics from time to time. As performance’s title indicated, it was advertised an acoustic affair.

Taking the Stage: The first 30 minutes of the stream included the band members introducing videos that gave background info about the All Within My Hands Foundation. And then the performance began with a deconstructed, rootsy rendition of the …And Justice for All opener, “Blackened”, which worked surprisingly well “unplugged.”

Set up-wise, frontman James Hetfield was seated on a stool and donned a white cowboy hat (and a closely-cropped hairstyle, with his hair entirely silver nowadays); guitarist Kirk Hammett modeled brown leather trousers and a black leather jacket; bassist Robert Trujillo sported a Black Sabbath shirt, bandana around his neck, and baseball cap a top his noggin (and hair pulled back in a ponytail); and drummer Lars Ulrich donned a backwards baseball cap (with his ever-present toothpick dangling from his mouth).

Up next was a slowed down rendition of another ‘80s-era Metallica classic, “Creeping Death”. While Hetfield chose to play a traditional-looking acoustic guitar for this portion, Hammett favored a sunburst-colored Fender “Acoustasonic Stratocaster”. The set-up saw the band facing each other rehearsal-style (including two supplemental instrumentalists, Avi Vinocur and Henry Salvial, lending a hand), while surrounding them were screens of images of fans watching the performance with their names listed underneath, In between songs, the band would often select a lucky fan to chat with, which added a nice intimate touch to the performance.

As with previous Metallica acoustic shows, quite a few surprises were in store – including a cover of an obscure tune from one of Lars’ favorite bands, Deep Purple (“When a Blind Man Cries”), plus the first-ever acoustic performance of “Now That We’re Dead”. In another cool surprise, two Metallica kids — Lars’ son Layne and James’ son Castor — provided percussion on “All Within My Hands.” And filling out the first half of the set were “The Unforgiven”, “Turn the Page” (Bob Seger cover) and “Nothing Else Matters”.

After a brief intermission, Metallica returned … donning electric guitars, providing viewers a pleasant surprise. As it turned out, this was not an all-acoustic performance. To kick the electrified half off, what better tune to select than the Master of Puppets epic “Disposable Heroes.” But wait a second … was it “Disposable Heroes”? It turns out the lads opted to throw a curveball our way — it was indeed “DH” (as evidenced by the familiar lyrics), but not with the expected music. Another surprise was up next, a rockin’ cover of “The House of the Rising Sun,” a tune that the Animals popularized back in the ‘60s.

“Wasting My Hate” received a rare live rendition (supposedly the first time it was performed by the band in almost a decade), before the two-hour performance came to a close with three of Metallica’s best-known tunes — “For Whom the Bell Tolls”, “Master of Puppets”, and “Enter Sandman” — before each member took turns thanking the viewers, with Hetfield advising “Be strong people. Support each other.”

Metallica’s “Helping Hands Concert & Auction, Live & Acoustic from HQ” livestream did not only provide entertainment for fans eager to see and hear the band perform live once more, but was also an excellent opportunity to aid others in need. Hopefully, more major rock acts will take Metallica’s cue, and do their own fundraising livestreams during this unexpected touring downturn.

Metallica’s entire benefit show is still available to watch on demand at this location, with ticket proceeds going to the All Within My Hands Foundation. In addition, the band has provided extensive highlights from the benefit show via its YouTube channel. Watch below, followed by the setlist and photos. And if you’d like to help out the All Within My Hands Foundation, donate here.