"She has an extraordinary voice. Like [Lady] Gaga, the voice is everything." 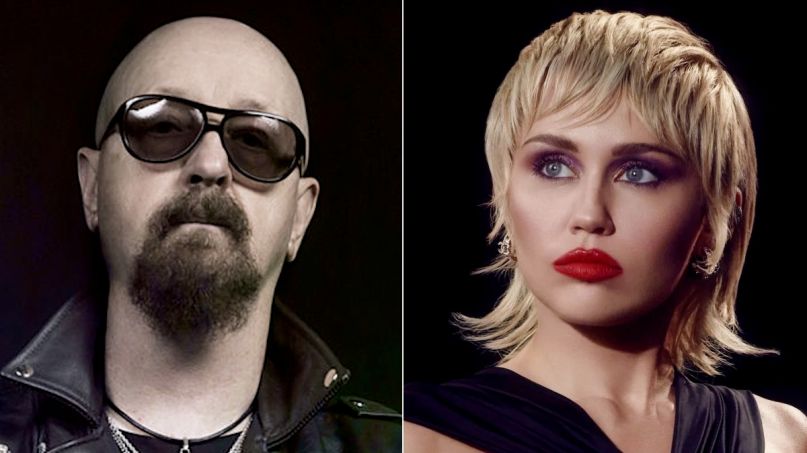 Last month, Miley Cyrus revealed that she was working on a Metallica covers album. Among those intrigued by the thought of pop star taking on the iconic metal act’s songs is none other than the “Metal God” himself, Judas Priest singer Rob Halford.

During an appearance on the Life in the Stocks podcast, Halford sang Miley’s praises. “She is incredible,” exclaimed Halford. “If you think about her life in show business from being a little kid, and how she’s kept her head on straight. … She went a big mad as a teenager, which you should do, that’s your right, she was expressing herself.”

He added, “I can’t wait [to hear her Metallica covers album], that’s going to be great. She has an extraordinary voice. Like [Lady] Gaga, the voice is everything, and she’s a metalhead, she’s always throwing the horns up. She’s someone I’d love to meet if the stars ever aligned.”

Halford went on to commend a number of female singers throughout history. “Women are so strong and powerful, especially in music,” remarked the metal legend. “Gaga, Madonna, Miley, my friend Maria [Brink] from In This Moment, and going back to [the 70’s UK band] Vinegar Joe’s [singer] Elkie Brooks, and Janis Joplin and Shirley Bassey … the power of women can’t be understated.”

As Miley continues work on her Metallica covers album, she is releasing a proper studio LP on November 27th. The album, titled Plastic Hearts, features guest appearances from Joan Jett and Billy Idol.

Halford, meanwhile, is promoting his new tell-all autobiography, Confess, which came out in September. The singer had hoped to be on the road with Judas Priest in celebration of the band’s 50th anniversary this year, but those plans have been pushed to 2021 due to the pandemic.

Hear Rob Halford talk about Miley Cyrus and other topics during his appearance on the Life in the Stocks podcast, and revisit Miley’s performance of Metallica’s “Nothing Else Matters” at the 2019 Glastonbury Festival below.