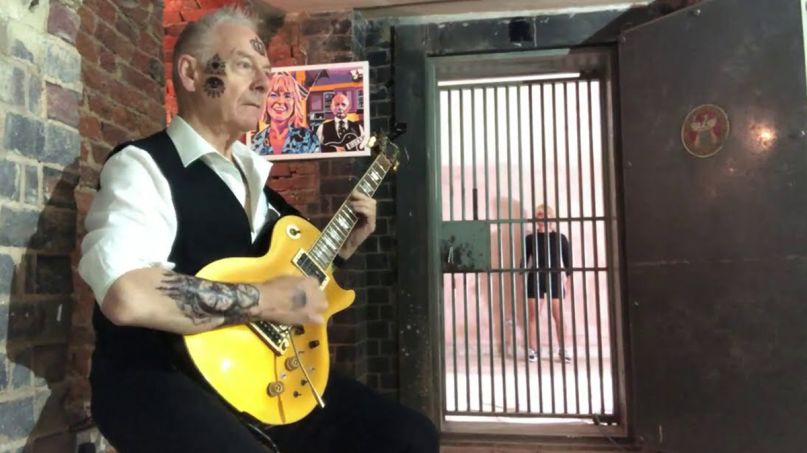 This year has seen its fair share of unexpected and bizarre phenomena, and King Crimson founder Robert Fripp and his singer wife Toyah Willcox have come to embrace it. The musical duo have spent quarantine making performance art videos, but their latest idea for Halloween might be their most absurd yet.

Donned in henna-like tattoos that cover his face and arms, Fripp starts playing Black Sabbath’s iconic song “Paranoid” on his Les Paul. Behind him, Willcox is locked behind bars — in what’s either an old prison cell or an underground bank vault — and starts dancing when the songs begins. When it comes time for the verses, she starts singing the metal classic

The effect of the video is pretty uncomfortable but morbidly entertaining. Perhaps the use of “Paranoid” and dancing in a cage is a metaphor for quarantine? Or maybe it’s just Fripp and Willcox’s idea of a Halloween joke. If anything, one can appreciate the originality of the premise, even if it resembles a feverish nightmare.

Willcox has had a notable recording career herself, having fronted her eponymous new wave band Toyah in the late ’70s and early ’80s. She has continued making music — releasing a number of solo albums along the way — while also maintaining a career as an actress.

Fripp and Willcox’s other videos include a cover of David Bowie’s “Heroes”, ballet performances, and other strange insights into their lockdown lifestyle — not all as creepy as the “Paranoid” cover.

The Black Sabbath tributes have been pouring in lately, with Magnetic Eye Records releasing two cover compilations as part of their Redux series. Best of Black Sabbath [Redux] and Vol. 4 [Redux] feature some of underground metal’s best artists taking a stab at covering their heroes. It all illustrates the collective reverence for Black Sabbath, who are beloved by young bands as well as prog legends like Fripp.

Watch Fripp and Willcox’s eccentric cover of “Paranoid” below.