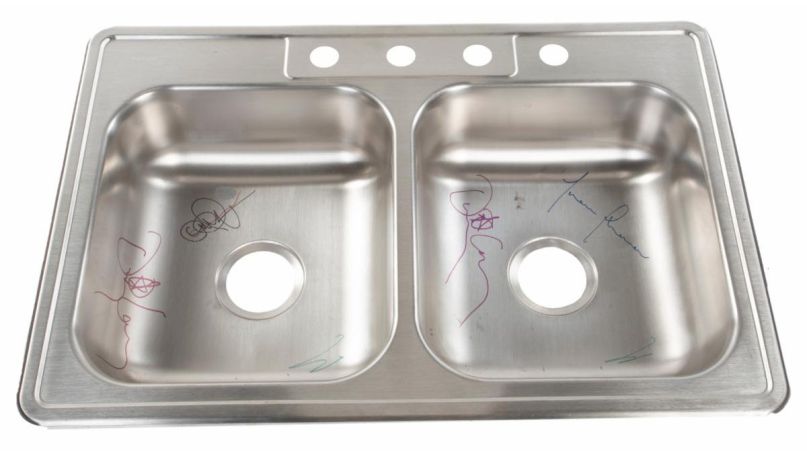 The Ronnie James Dio Stand Up and Shout Cancer Fund has announced a benefit auction featuring some truly one-of-a-kind rock memorabilia. Among the items headed to auction is a stainless steel kitchen sink signed by all four members of Tool.

Yes, you can own a sink signed by Tool. But, in a cruel twist of irony that only Tool could conceive, you probably won’t be able to actually use the sink, unless you want to lose the signatures.

However, given the extremes that people will go to for rare Tool memorabilia — notably a recent theft of 13 custom Adam Jones guitars — it’s an ingenious way to raise money for Dio’s cancer fund. As the press release states, “Tool members are generally reluctant to sign items to donate. However, when presented with ‘the kitchen sink’ and a good cause, they couldn’t resist.”

The other items in the auction are a bit more… normal, such as a special limited-edition Les Paul featuring the artwork from Dio’s iconic album Holy Diver. Individual guitars autographed by Lita Ford, Nancy Wilson of Heart, John 5, Avenged Sevenfold, Motörhead, and Slash will also be sold, as will a single Schecter Omen Solo 6 guitar signed by 15 musicians including the late Eddie Money and members of Dio and Quiet Riot. The lot also includes vintage Beatles and Fleetwood Mac memorabilia.

The legendary Ronnie James Dio — who fronted Rainbow, Black Sabbath, and his own eponymous band — passed away from gastric cancer in 2010. The Ronnie James Dio Stand Up and Shout Cancer Fund is dedicated to cancer prevention, research, and education. Those who want to make direct donations to the charity organization can do so at this location.