Their sophomore full-length is out January 15th via Dead Oceans 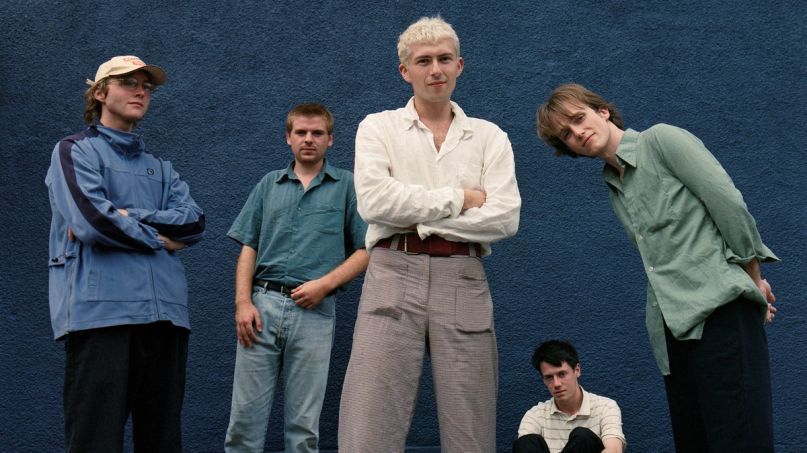 Shame will return early next year with their sophomore album, Drunk Tank Pink. As a preview, the UK post-punks have unveiled a frantic new single called “Water in the Well”.

Drunk Tank Pink is the London band’s follow-up to their 2018 debut Songs of Praise. They’re not sharing a tracklist or too many details about the project just yet, but in the press bio, Shame explain that the album was written after they returned home from years on the road feeling burnt-out, hungover, and existentially lost. Rather than write the same kind of jittery post-punk that made up their first full-length, Shame reached for additional outsider influences (ESG, Talk Talk) and dove head-first into more ambitious arrangements.

The incredibly refreshing “Water in the Well” sets the tone nicely. The first verse recalls the taut funk-punk of Parquet Courts’ Wide Awake! crossed with Shame’s signature post-punk. However, it eventually it takes off and becomes a total rock ‘n rolle.  Frontman Charlie Steen abandons his stiff speak-sing for an ecstatic yelp that sounds a little bit like The Hives’ Howlin’ Pelle Almqvist, and the rest of the band joins in with squawking gang vocals, electric percussion, and a simple yet powerful lead riff that begs to be the soundtrack to your morning head-banging session.

The accompanying video alternates between Steen singing with his hands on his hips and a quick-cut montage full of computers, roadways, and the group rocking out in the back of a car. It’s a neat visual for the track’s raucous climax. Watch it below.

Without a tracklist to cross-reference, it’s unclear whether Shame’s recent single “Alphabet” will appear on the record. But either way, Drunk Tank Pink is already shaping up to be one of the first anticipated rock albums of 2021, so mark your calendars for January 15th.