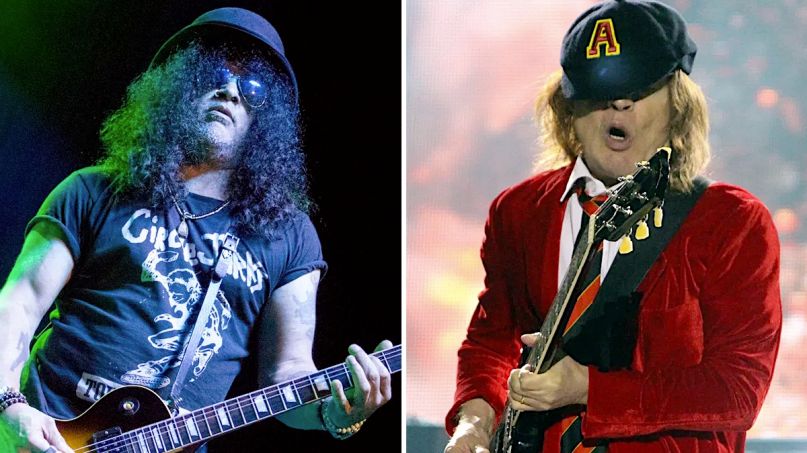 AC/DC’s new album, Power Up, has been met with widespread acclaim by fans and critics alike. One of those fans is Guns N’ Roses guitarist Slash, who tells us that the LP is “a great f**cking record.”

In our own review of Power Up, we declared it AC/DC’s best album in 30 years. The LP features the return of classic members Brian Johnson (vocals), Phil Rudd (drums), and Cliff Williams (bass), who all came back to the band after parting for various reasons. Along with mainstay lead guitarist Angus Young and rhythm guitarist Stevie Young (who stepped in for the late Malcolm Young), the legendary rock band has made a triumphant comeback.

Slash has long expressed his love for AC/DC, calling them one of his biggest influences. So, when we had a chance to speak with him about the new Guns N’ Roses pinball machines and his new collection of custom Gibson guitars (full interview coming soon), we couldn’t help but ask the guitarist about his thoughts on the new AC/DC album.

“I obviously have a long history with AC/DC, and then Axl [Rose] was singing with them for a minute when Brian was out, so we got reacquainted during that period,” Slash told us. “So, the first bit of great news, I talked to Brian and he was telling me about this hearing [device] that he got, and that he’s back in AC/DC. And that was just f**king awesome news.”

He continued, “And the tragedy of losing Malcolm … the fact that Angus and company would survive that and keep it going, in the spirit of probably what Malcolm would have done, was great. I just love those guys because as far as rock ‘n’ roll is concerned, they just are driven.”

And that brought Slash to AC/DC’s Power Up, which was released on November 13th after much anticipation. “Then, on top of it, they make such a great f**king record at this point in the game. It’s a really inspired album. I’ve had it in the car for the last couple of days and it’s probably gonna sit there for a while. It’s exciting for me. I’m happy for them, and I can’t wait for this virus situation to end so we can go check them out on tour somewhere.”

Stay tuned for our full interview with Slash, and pick up AC/DC’s new album, Power Up, here. See Slash and others in our recent virtual celebration of AC/DC’s Back in Black below.