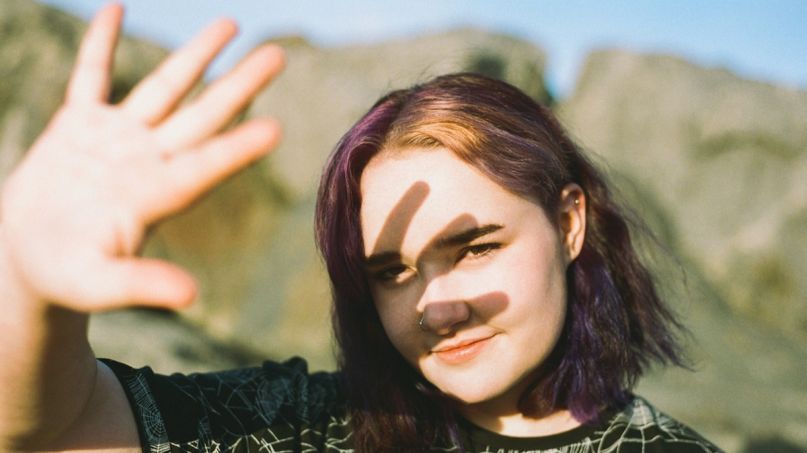 Over the last couple years, there’s been a flood of young artists who’ve kickstarted careers by writing intimate, catchy, and self-recorded pop songs. Smoothboi Ezra is one of them, and today the 18-year-old artist (they/their) has released a new single called “My Own Person” that’s positively magical.

Operating out of their bedroom in Greystones, Ireland, Smoothboi Ezra began releasing ukulele pop songs in 2018 that were cut from the same cloth as artists like beabadoobee, chloe moriondo, and Frankie Cosmos. Last year, they dropped an EP called is it that featured slightly more complex arrangements (electric guitar, a drum machine), but “My Own Person” is the most ambitious and promising song they’ve released so far.

The track begins with a sparse drum machine, hushed keyboard strokes, acoustic strums, a weary electric guitar lick, and Smoothboi’s matter-of-fact vocal delivery. Then, about halfway through, the rhythm becomes a hypnotizing trip-hop beat and they begin to layer long, stretching vocal “aah’s” beneath their full-chested belt. “I wanna blend into the background/ I wanna be nobody and never make a sound / But I wanna stop feeling like I can’t be myself,” they sing with triumphant force atop soaring background vocals.

According to a press release, Smoothboi Ezra is influenced by Phoebe Bridgers, and “My Own Person” definitely channels Punisher’s grandest moments while also recalling the twee cleverness of Sidney Gish. Take a listen below.

In a statement, Smoothboi shared that they actually wrote this song a couple years back when they were 16, and it encapsulates the depersonalization they were feeling at the time.

“I had one or two outfits I would interchange and I wore the same grubby pair of shoes every day,” Smoothboi said. “They were replicas of a previous grubby pair I wore when I was 14 and 15. The song is about not being happy but not being able to do anything about it.”

“My Own Person” is the first taste from a batch of new songs that will be released over the next couple months. Until then, take some time to familiarize yourself with Smoothboi Ezra’s discography on Bandcamp.