The Weeknd Links Up With Maluma For “Hawái” Remix: Stream 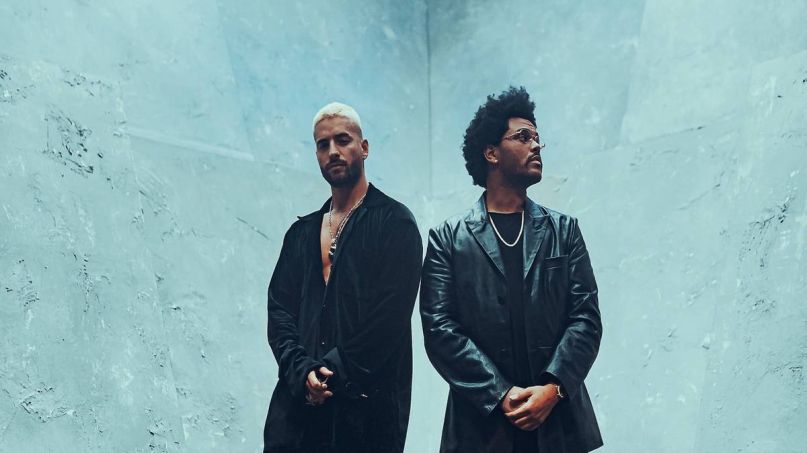 Maluma and The Weeknd, photo by Phraa

The Weeknd has teamed up with Maluma for a remix of the reggaeton icon’s hit song “Hawái”. On it, the After Hours artist sings in both Spanish and English.

The two singers began teasing the collaboration on Instagram on Wednesday, and now the track has arrived less than 24 hours later. It begins with The Weeknd singing an altered version of the intro verse in English and before suddenly switching to Spanish for the hook. The Colombian pop star then comes in and handles the rest of the verses while The Weeknd joins him on the refrain. Despite the fact that they both play different styles of music, the two have an incredible chemistry and The Weeknd sounds particularly comfortable singing on a reggaeton beat.

The song comes paired with a flashy music video that suits both of their looking-gloomy-in-the-club breeds of pop music. Maluma is surrounded by women who keep trying to catch his gaze, but he’s too preoccupied thinking about his ex to actually engage with someone new. It’s a setting that The Weeknd thrives in as America’s patron saint of dreary club vibes, and the two look sharp when they sing under the neon blue lights. Take it all in below.

While speaking with Zane Lowe on Apple Music, Maluma called working with The Weeknd “a huge moment for Latin culture.” “He’s a real artist, man, what he did in this song,” Maluma said. “For him, it was like he was doing reggaeton for his whole life. And I knew that his voice in the song could work amazing. And that’s what happened.”

He continued, “At the beginning, when I listened to the first verse when he just started the song, that we changed the whole intro of the song, I put his vocals there, I was like, ‘Bro, this sounds like The Weeknd’s song.’ I couldn’t believe how good it was mixing his vocals with my vocals.”

The original version of “Hawái” appeared on Maluma’s August surprise-album Papa Juancho. The Weeknd has been all over the place as of late: featuring on Ariana Grande’s Positions, executive producing Oneohtrix Point Never’s new album, and inviting Kenny G on a remix of his After Hours track “In Your Eyes”.