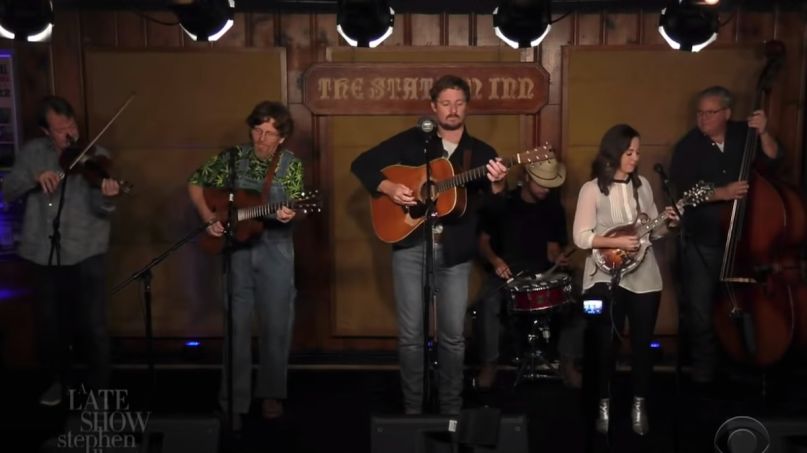 Sturgill Simpon on The Late Show with Stephen Colbert

Sturgill Simpson has conquered country music, anime, and even COVID-19. Lately, he’s been taking it to bluegrass with his new album, Cuttin’ Grass – Vol. 1 (The Butcher Shoppe Sessions). On Tuesday night, he promoted the release with a performance of the single “Breakers Road” on Colbert.

The slight country quiver in Simpson’s voice translates well to bluegrass, but it’s the band he’s assembled for this project that really helps it shine. On Colbert, it was Sierra Hull’s mandolin work that stood out most in her two solos, while guitarist Tim O’Brien appeared like the quintessential front porch picker in his marijuana leaf shirt and loose overalls. The whole thing ended with a full-band round that’d make roots fans miss summertime jam sessions even more than this past season already did.

Prior to the performance, Simpson chatted with Stephen Colbert about his battle with coronavirus. He revealed the timeline of his infection, as well as his symptoms: “[The worst of the] symptoms seemed to almost evaporate almost as soon as they came on, in about a couple of days,” he said. “Then I just had three weeks of what I would describe as extremely intense fatigue. Then after that it felt like I have superpowers now, I guess.”

Later, Simpson touched on his relationship with the late John Prine, revealing that he first met the country folk icon while mixing at Prine’s own Butcher Shoppe studio: “When I turned around, John was sitting in a chair in these plaid pants, just kind of looking. I had no idea how long he’d been sitting there… He was like, ‘That’s pretty good. Wanna go get some meatloaf?'” Their relationship grew so strong from there that Prine actually left Simpson his 2008 Porsche 911 Turbo in his will.

The host and the musician also revisited their Waffle House song from 2016 and talked about Simpson’s transition to bluegrass. Watch the whole chat, as well as the replay of “Breakers Road”, below.

In addition to releasing Cuttin’ Grass himself, Sturgill appeared on Margo Price’s recent live album Perfectly Imperfect at The Ryman and also produced her latest full-length, That’s How Rumors Get Started.