System of a Down’s Comeback Songs Help Raise $600,000 for Artsakh and Armenia 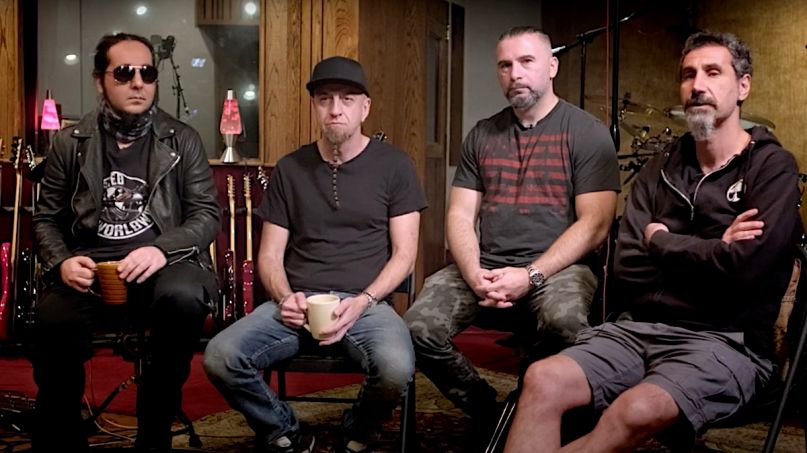 System of a Down surprised the music world with their first new songs in 15 years this past Friday. Less than a week later, the charitable singles have helped raise more than $600,000 for Artsakh and Armenia amid ongoing conflicts with Azerbaijan and Turkey.

While the Armenian-American metal act has remained an active touring entity, the band hadn’t released new music since 2005’s Hypnotize until dropping the songs “Protect the Land” and “Genocidal Humanoidz” last week. The members of System of a Down explained that they set their creative differences aside to record the songs to aid their ancestral home of Armenia and its neighboring state Artsakh in the midst of “horrific injustices and human rights violations” being perpetrated by Azerbaijan and Turkey.

Now, the band has unveiled a video of the four members sitting together discussing the cause, along with releasing a new statement offering appreciation to fans who have purchased the songs and donated to the Armenia Fund:

“We are overwhelmed with gratitude for your incredible support of our campaign for the people of Artsakh, and for helping us raise over $600k in donations to provide for those in dire need via the Armenia Fund. Because of you, we will be able to help displaced civilians, young and old, who are affected by the hideous war crimes inflicted upon Artsakh by Azerbaijan and Turkey. Please take a few minutes to watch our full interview to get a more intimate look and understanding into why we came together to release ‘Protect The Land” and ‘Genocidal Humanoidz.’ To the four of us, it’s extremely important to share these truths with you. It is for our ancestors, our culture, and our nation. Help us spread the message.”

In the video (watch below), the SOAD members — singer Serj Tankian, guitarist-vocalist Daron Malakian, bassist Shavo Odadjian, and drummer John Dolmayan — all discussed why it was so important for the band to come together to record these new songs, as well as get the word out about the atrocities taking place in Artsakh and parts of Armenia.

“What we’re hoping is that what happened in 1915 [the Armenian Genocide] and what’s happened so many times in history doesn’t repeat itself,” said Dolmayan in the video interview.

Tankian added, “It’s an injustice that we want people to pay attention to, and that’s why we’re doing this. So that they can, in turn, inform their own government bodies, who can respond properly.”

The singer continued, “As System of a Down, this has been an incredible occasion for us to come together, and put everything aside and speak out for our nation, as one.”

The video interview is also significant in that all four members of the band are sitting together despite polarizing political differences between Tankian and Dolmayan when it comes to American politics. Dolmayan is an ardent Trump supporter, even declaring recently that “the election is not over”, while Tankian has consistently expressed contempt for Trump and his administration.

Proceeds from the purchase and downloads of the new songs “Protect the Land” and “Genocidal Humanoidz” will continue to go to the Armenia Fund. The tracks are available via the band’s merch store (on split 7-inch vinyl), Bandcamp, and Amazon.

Check out the full System of a Down video interview below, followed by the new singles “Protect the Land” and “Genocidal Humanoidz”.