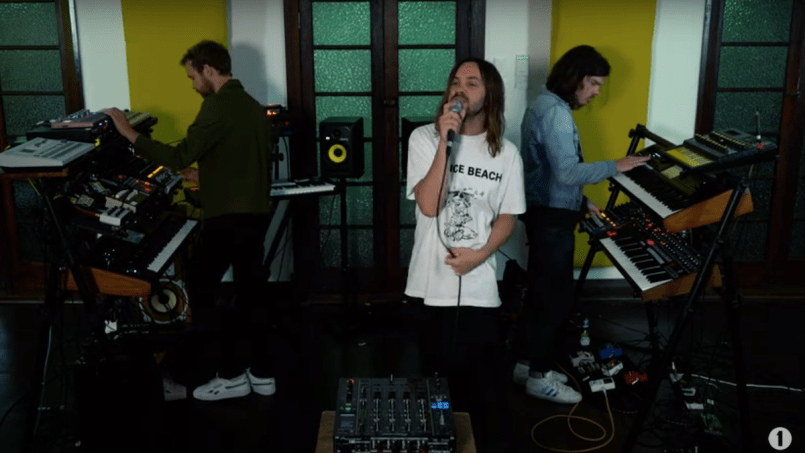 Like ice cream and french fries or cheddar cheese and apple pie, Kevin Parker and Timbaland are an unexpectedly satisfying combination. This was evident on today’s episode of BBC Radio 1’s Annie Mac Show, when Tame Impala covered the Timba-jam “Say It Right” by Nelly Furtado.

The song dates back to the year of our Timba-lord 2006, when the producer born Timothy Mosley had transitioned from Missy Elliot’s secret weapon to the greatest force in pop music on the planet. His incredible 2006 run included the spaced-out drama of Justin Timberlake’s FutureSex/LoveSounds as well as Furtado’s chart-topper Loose. “Say It Right” was the third No. 1 single from Loose, and while “Maneater” and “Promiscuous” have great beats to their credit, there’s little wonder that Parker was drawn to “Say It Right”. As performed in his home studio, the song could effortlessly slot into Tame Impala’s 2020 album The Slow Rush.

The one-man band performed as a trio, with Parker setting up the beat and then spending the rest of the song as a mere singer. His distant, slightly nostalgic delivery is perfectly suited to lyrics like “You don’t mean nothing at all to me,” and the band’s laid-back approach shows that “Say It Right” could work just as well for a relaxing day at the beach as it did for all those sweaty nights at the club.

Later in the show, Tame Impala busted out a rendition of The Slow Rush standout “Is It True”. Parker’s bandmates had a lot more to do this time around, which is one of the reasons the performance felt so energetic and fresh. Check out that and “Say It Right” below.

Last month, the band played  “Elephant” and “Is It True” in an empty soccer stadium, covered John Lennon’s “Jealous Guy”, and performed the Lonerism cut “Why Won’t They Talk to Me?” in a promotional video for Adobe Max.