Wayne Coyne and co. will stage their first public performance since the beginning of the pandemic in Oklahoma City in January 2021 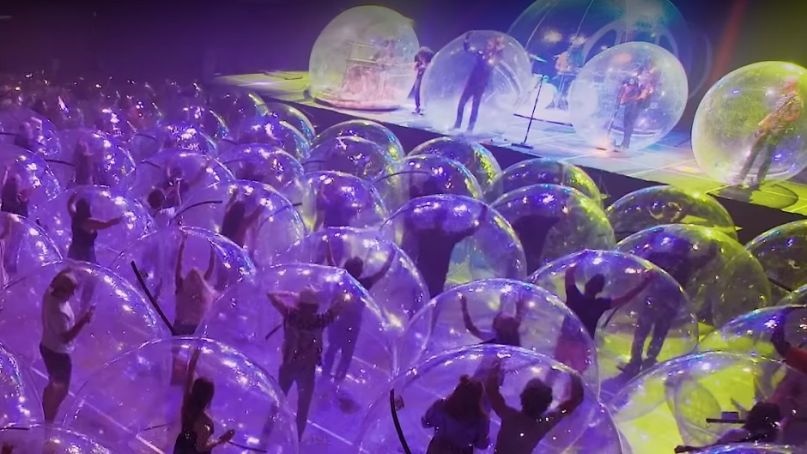 Following a series of trial runs, The Flaming Lips are finally ready to present a space bubble concert for the general public.

As BrooklynVegan points out, the band will take the stage at Oklahoma City’s The Criterion on December 11th for what they’re calling the “World’s First Space Bubble Concert.” The venue will be filled with 100 giant, inflatable hamster balls, each of which can accommodate between one to three people.

Update: The Flaming Lips have added a second date in Oklahoma City for December 10th. If things go off as expected, they’re planning additional performances for January 15th and 16th, 2021. Additionally, Wayne Coyne has shared a video Q&A answering fan Q&As about the shows, which you can watch below.

Update #2 — Tuesday, December 1st: Due to the recent surge in coronavirus cases in Oklahoma and the rest of the US, both of the Flaming Lips’ “Space Bubble” concerts have been postponed. The December 11th gig is taking place January 22nd, while the December 10th one is now set for January 23rd. Refunds are available to those who can’t make these new dates, according to an Instagram post from Coyne.

In an interview with BrooklynVegan earlier this year, FLips frontman Wayne Coyne said his own experience playing inside of a space bubble gave him confidence in the band’s ability to execute the idea. “It holds a lot of air. I mean, you can be in there for quite a while. I just don’t think people quite realize what it is as a mechanism. But we’ve just messed with them for so long, we kind of know that it can all work and how it can work and all that.”

The Flaming Lips have staged a series of trial runs ahead of the December 11th concert. They themselves performed inside of bubbles during late-night performances on Fallon and Colbert, the latter of which also featured an audience. They also recently played a private show for family and friends, which they turned into a live video for “Assassins of Youth”.

As another preview of the upcoming concert, The Lips have shared a new live video for “Brother Eye” from their latest album, American Head.

Editor’s Note: If a space bubble is not handy, you can still stay safe by picking up a face mask. A portion of proceeds go towards supporting independent musicians.