The Kills Perform “Raise Me” on Corden: Watch 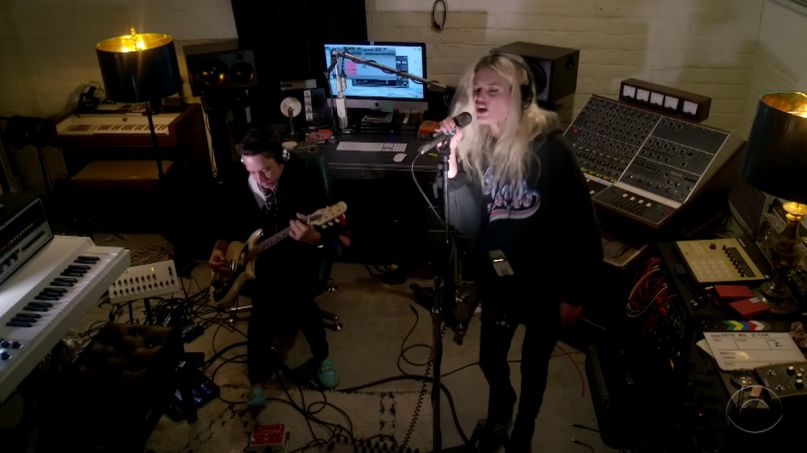 The Kills on The Late Late Show with James Corden

James Corden is well aware that not many people are tuning into The Late Late Show this week, what with everyone on pins and needles about the election results. He even said as much during his “Honest Headlines” segment last night. Yet ever the consummate host, Corden soldiered on with his late-night program, welcoming The Kills for a quick chat and performance.

The rock duo were there to promote their Little Bastards rarities compilation by playing the lead single, “Raise Me”. Admittedly, it’s a bit odd seeing two such powerful performers as Alison Mosshart and Jamie Hince locked into a small home studio space instead of tearing into a stage. That said, the sound was pretty impeccable, with Mosshart’s voice as sharp as ever and Hince simultaneously playing a keyboard and hammering on his guitar.

Prior to performing, the pair Zoomed in with Corden for a quick chat about the comp and the presidential election. Hince is, of course, British, and he and Corden commiserated about living in the United States of America (“Which sounds more ironic every time you say it out loud,” quipped Corden) at this moment.

Hince admitted he was as stressed as anyone, noting, “But for me it’s weird, because it’s like, I don’t live where I can vote and I can’t vote where I live. So I’m kind of caught between this — I don’t know what you’d call this — war of the worlds, civil war, or going back to the Boris clown prison. What do we do?”

Watch the whole thing below.

Little Bastards is out December 11th. Ahead of Halloween, The Kills also shared their take on “I Put a Spell on You” from the collection.