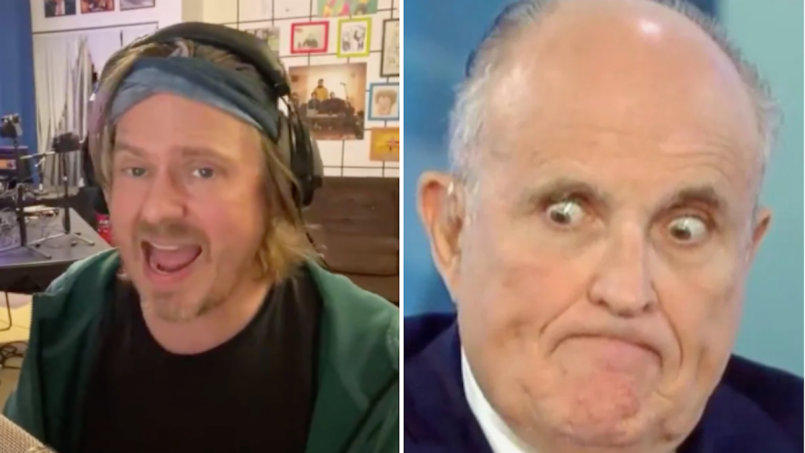 On Saturday, November 7th, Donald Trump announced a press conference at the Four Seasons Hotel in Philadelphia. Soon afterwards, his campaign offered the correction that, actually, Rudy Giuliani would be speaking to reporters from the parking lot of Four Seasons Total Landscaping, between a crematorium and Fantasy Island Adult Bookstore. Now, like a bard of old, Tim Heidecker has written a new ballad worthy of our current crop of leaders, and he’s titled it “Rudy at the 4 Seasons”.

Heidecker shared the tune last night on Twitter. Like any good dramatist, he begins by sketching out the scene. “Standing out in front of a pile of manure,” he sings, “Spitting out lies that belong in the sewer.” His Giuliani imagines himself at a posh ballroom, eating crudités instead of supplying crudity.  But Heidecker is open to the idea that it was all intentional, asking Giuliani if, “With your hand down your pants maybe you don’t wanna do a hotel?” Even so, this particular parking lot seems like a curious choice. Heidecker offers the advice that, “Maybe next time/ You and your friends can find/ Someplace that isn’t next to a dildo store.” Check out “Rudy at the 4 Seasons” below.