A cliché collection of anthems you'll sing today, tomorrow, and 50 years from now 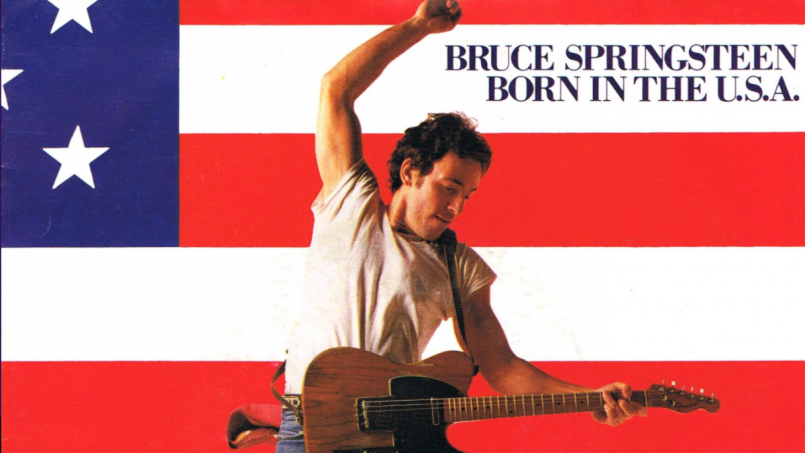 Bruce Springsteen - Born in the USA

This feature originally ran November 2008 and has since been edited for Election Day 2020.

Election Day is among us, though. So, it doesn’t matter if you get nauseous any time you flip by C-SPAN or that you once had an asthma attack during your eighth-grade field trip to Washington, D.C. Truth be told, the country’s future is on the line, and it’s your civil duty to get out there and cast a ballot.

As a source of inspiration, we scrambled together a cliché collection of the best political anthems out there. Because, really, sometimes you just need to hear the hits again to feel good about something — it’s sort of like how every sports team relies on the same three or four songs to get everyone in the mood.

So, slap on those headphones, pump up the volume, and head to your local polling place. Don’t know where to go? Good news for you: Google has created this unbelievable search engine to help you find exactly what you need, including your district’s local polling place. It’s really that easy, folks.

“Rise Above” is just a balls-to-the-wall, throw-’em-up-in-the-air, politically motivated song. Written by Greg Ginn, the opening track off of Black Flag’s 1981 debut, Damaged, is probably the first thing every kid should hear on their 13th birthday. The chorus is anthemic (“We are tired of your abuse/ Try to stop us, it’s no use”), the rhythm is heavy, and the aggression is immaturely focused. If you missed out on this baby in middle school, do yourself a favor and kick up a riot at age 30.

Everyone recognizes the signature guitar riff, the bouncy bass, the shuffling drums, and the hallway hook of Mick Jagger: “I can’t get no/ Satisfaction.” There’s a reason it’s quite possibly the most overplayed song in radio history: it shakes, it rattles, it rolls. Ever since it first appeared on The Rolling Stones’ 1965 diamond, Out of Our Heads, this historic rock ‘n’ roll landmark has remained a favorable chunk of rebellion, even if it’s hardly political. Hey, that’s never stopped the crowds.

Leave it to M.I.A. to not only properly sample The Clash, but one of the greatest and most poignant anthems in the band’s catalog. Without the echoes and beats of “Straight to Hell”, it’s unlikely that “Paper Planes” would have had the same emotional punch that it did back in 2007. Nevertheless, the Kala hit gives the former protest song a face lift for the 21st century, turning M.I.A.’s meditations on immigration and violence into something worth dancing over.

Love ’em or hate ’em, U2′s still responsible for three of the greatest albums of the last 40 years: 1983’s War, 1987’s The Joshua Tree, and 1991’s Achtung Baby. Bono and co. preside over a great body of work, and much of it is very political. Although “Sunday Bloody Sunday” doesn’t factor into American politics whatsoever, the oppression of war and violence will tragically be a human problem forever, which is why we’ll always ask: “How long must we sing this song?” Forever.

When the late Beatle John Lennon screamed, “I’m sick and tired of hearing things/ From uptight, short-sighted, narrow-minded hypocritics/ All I want is the truth,” everyone probably said, “Well, you know what? Me too!” And we still most certainly do, which is why this bluesy, psychedelic number off 1971’s Imagine remains ever prescient. Here’s an English lad who said like it is … or was … or is. Whatever, the song speaks volumes today, and we still don’t need no yellow-bellied, son of tricky dicky’s!

In 1985, it took dozens of A-list celebrities, including the King of Pop himself, to sell “We Are the World” to millions of people across the world. Yet Marvin Gaye, when he was still alive and behind the boards, could do it all on his own. “What’s Going On?” is living proof of this, a ballad that has endured every generation, every demographic, and every decade to remain the go-to song of unity and equality. It’s in the voice, sure, but it’s also in the title itself. Sometimes, that’s all you gotta say.

Few poems ever receive the notoriety that Abel Meeropol’s did, but when you have Billie Holiday on vocals, history tends to follow. Originally titled “Bitter Fruit”, this brazen protest song depicted a terrifying portrait of the many lynchings that were happening across America in the early 20th century. Since then, Holiday’s stirring ballad has influenced the likes of Bob Dylan and Kanye West as it’s bled into all things pop culture, ranging from film to television to comic books.

Thank heavens for Public Enemy. By 1988, Chuck D’s outfit had already owned the hip-hop genre, turning beats into left hooks that knocked everyone flat on their ass. Director Spike Lee saw that energy and used it to his advantage on his striking 1989 masterpiece, Do The Right Thing, seemingly building an entire film around the group’s unapologetically rebellious message of “Fight the Power”, which wouldn’t see an official release until the following year on Fear of a Black Planet. The song’s like a history book you never have to update.

Your grandparents know this song, your parents know this song, and your kids will know this song. Reason being, the late Queen of Soul Aretha Franklin tapped into something that still alludes each and every human being almost any given day of the week — “a little respect.” Although the song itself was originally written and released by Otis Redding, Franklin made it her own in 1965, turning the ditty into a groundbreaking feminist statement that has scored American politics for decades.

What would a list of political songs be without the inclusion of The Boss? Bruce Springsteen is an American institution, and he’s long kept his star-striped eyes on this country. Out of all his politically-charged anthems, though, it’s the titular track to his 1984 juggernaut album, Born in the USA, that has arguably endured the years and gotten the most mileage.

Maybe it’s the poppy beat, a sarcastic juxtaposition to Springsteen’s sobering poetry, that has kept it alive amid the American vernacular. (Hell, that’s why the Reagan administration used it like a bunch of idiots.) Or maybe it’s because this country has yet to treat its working men and women like anything else but piles of trash on the side of the road.

When Springsteen seethes, “Born down in a dead man’s town/ The first kick I took was when I hit the ground/ You end up like a dog that’s been beat too much/ ‘Til you spend half your life just covering up,” he’s not just talking about the ’80s. He’s talking about a present that has sadly always been this country’s future. And so, we’ll keep on singing.