Trent Reznor on Nine Inch Nails’ Rock & Roll Hall of Fame Induction: “The Journey Is Far from Over”

NIN was formally inducted during a HBO telecast on Saturday 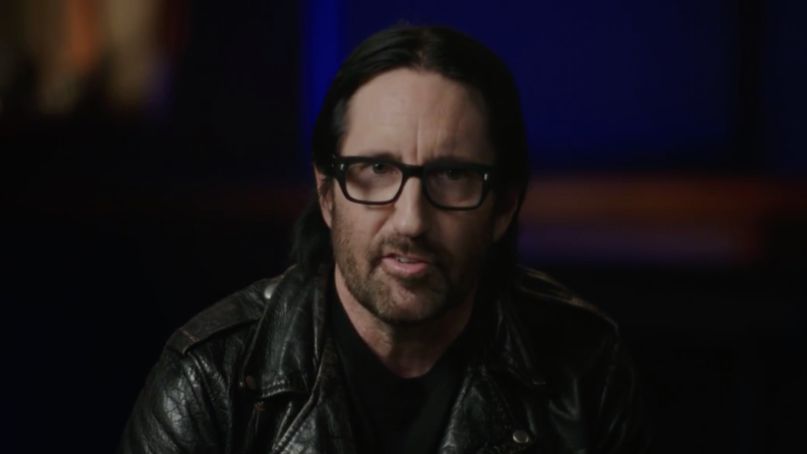 This evening, Nine Inch Nails were formally inducted into the Rock and Roll Hall of Fame. Because of the pandemic, this year’s live ceremony was canceled and replaced with a pre-recorded two-hour special airing on HBO.

Iggy Pop had the honors of introducing Nine Inch Nails into the Rock Hall of Fame. He began his remarks by describing his perception of the band’s music: “Listening to Nine Inch Nails’ music, which is so often called industrial, I actually hear funk. Just listen to ‘Closer’ — the foundation could be Stevie Wonder or George Clinton,” Pop noted. “On top of that is a focused and relentless process of emotional destruction which paints a portrait of pain, pressure, and dissatisfaction. It’s the soundtrack to the dark and lonely party which was beginning to play out in America at that period. I would call it, not industrial, but the sound of industrial, digital ambition.”

Pop then reminisced about his first time seeing NIN live and how he was immediately struck by the band’s frontman, Trent Reznor. “I went to the Nine Inch Nails show in the Forum in Los Angeles – the one with David Bowie. Trent held the center of the room just by being a kind of dark spot, hunched behind the mic,” Pop recounted. “I had seen the same thing accomplished in different ways by T. Rex at Wembley, Nirvana at the Pyramid Club, and Bob Dylan in 1965. This is the mark of a master artist – simply to connect.”

“Listening to Nine Inch Nails feels like hearing the truth,” Pop concluded. “It gets you a little bit closer to God.”

“Nine Inch Nails was always outsider music. The rest of music and culture was moving a certain way, and they were always outside of it,” commented Rubin. Clark specifically mentioned NIN’s performance at Woodstock ’94, saying, “The performance at Woodstock in the mud … that’s gonna be in my brain forever. They just created this world that was tumbling towards Hell in the best possible way.”

Reznor discussed the band’s formative years, its ascension to international fame, and the pressures that came along with it. “The whole Johnny Cash thing came up at a time right when what was going through my head was really questioning my own relevance,” Reznor said of Cash’s now-legendary cover of NIN’s “Hurt”. “I was wondering if I had anything to say, or if I was any good.”

Reznor also spoke about how touring with Nine Inch Nails provides him with the greatest sense of pride. “A lot of times I look in the front row and it largely looks the same as it did 25 years ago,” he remarked. “It’s not the same people, but it still looks like — there’s the same goth kid in the front row, who might be his son now.”

But as Reznor concluded, he’s not about to rest on his laurels: “I still feel like there’s so much I haven’t done and there’s so much I don’t know about music… I got to get my shit together and get going on this.”

From there, Reznor appeared on camera to deliver an acceptance speech. “What a disorienting strange year we find ourselves in,” he began. “As I’ve been wrapping my head around Nine Inch Nails being welcomed into the Rock & Roll Hall of Fame, I think I was most looking forward to the ceremony itself, where hopefully the whole camp, past and present, was going to get together and have a moment. And we’re all stuck in our little boxes, staring at our screens.”

“Even now, music has always been the thing that keeps me going,” he continued, “and as an artist I think the most significant accomplishment or feeling is realizing that something you created from a fragile and intimate place has reached out, resonated, and affected someone else, possibly changing how they see the world. As to what being in the Rock and Roll Hall of Fame means, thank you for the recognition.”

Reznor went on to recognize the other NIN members being inducted into the Hall of Fame — Atticus Ross, Robin Finck, Chris Vrenna, Danny Lohner, Ilan Rubin, and Alessandro Cortini — as well as other past and present associates of the band. (Acceptance speeches from the rest of Nine Inch Nails’ members can be found on the band’s website.)

“And for the Nine Inch Nails fans out there: we’ve wound up in some weird places together and you’re an intense bunch who drive me out of my mind, but you’re the best,” Reznor said to conclude his speech, before reiterating once again that “the journey is far from over if I have any say in it. So let’s stop fucking around, patting ourselves on the back, and get to it.”

Editor’s Note: Consequence of Sound is donating a portion of all proceeds from our online store to independent musicians impacted by the pandemic. Grab a T-shirt, hoodie, or face mask!