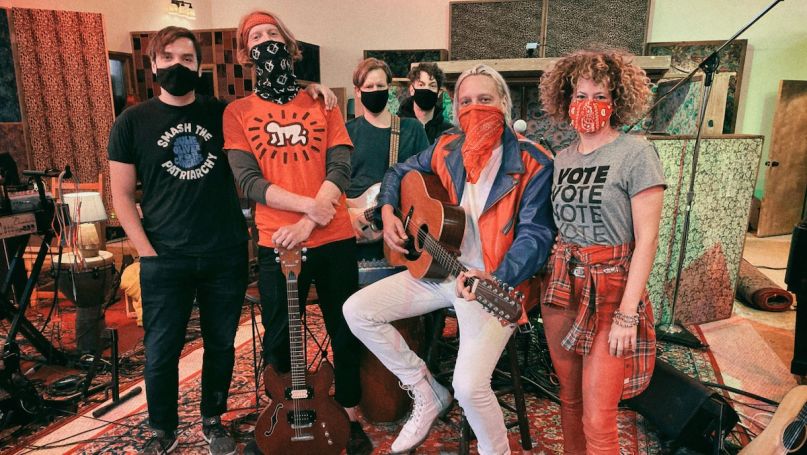 Arcade Fire debuted a brand new song called “Generation A” as part of their appearance on Stephen Colbert’s election night special on Showtime.

In introducing the performance, Colbert described the song as “inspired by the current climate of the country with a hopeful message to the youths.” Musically, “Generation A” hears Arcade Fire continue to embrace the wilder synth sounds heard on their previous two records, albeit with a driving thud of bass that gives the song a punk oomph. “They say wait until you’re ready,” sings frontman Win Butler. “Wait until your number’s called/ They say wait, all we need is love/ But darling, California’s burning, New Orleans is waiting for the flood.”

In a band photo posted in anticipation of the Colbert special, Régine Chassagne wore a shirt with the word “vote” all over it, while Will Butler’s “Smash the patriarchy” tee was in support of Julie Oliver, a Democratic Congressional candidate from Texas.

For AF, their participation in Colbert’s Showtime program shouldn’t come as a huge surprise, as the indie outfit had been very politically active in the weeks leading up to Tuesday. Just a few days ago, three members of the group performed an acoustic rendition of the Suburbs song “Culture War” to promote Justin Vernon’s For Wisconsin, a campaign that advocates for voters’ rights. Butler also sat down for a conversation with former presidential candidate Beto O’Rourke prior to the band joining O’Rourke in phone-banking voters in Texas.

Arcade Fire also revealed a specially curated Election Day playlist on Spotify. Their #JoyToThePolls mix, which features tracks from Ella Fitzgerald, Art Garfunkel, Harry Nilsson, The Mamas & The Papas, can be streamed at the bottom of the post.

Outside of politics, AF recently confirmed that they’ve written “two or three” albums while in quarantine. Regardless of the election results, at least we have that new music to look forward to.

We made a playlist to soundtrack your Election Day. Stay safe and please vote 💙 #JoyToThePolls

Texas native Win Butler and Arcade Fire invite you to join us on a phone bank tonight. We’ll be calling the Texas voters who have yet to cast their ballots in the BIGGEST SWING STATE in the country. We can win this with your help: https://t.co/4zCpkVVNPj https://t.co/zpgjqZWy52