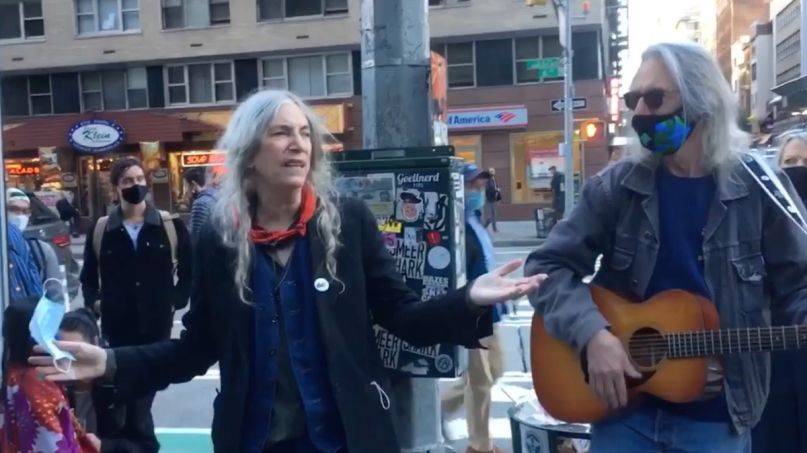 During the last few hours before Election Day, Patti Smith took to the streets of New York City to busk for those in line for early voting. The punk legend aptly delivered an impromptu yet still wholly inspiring performance of “People Have the Power”, while accompanied by longtime collaborator and friend Lenny Kaye.

Standing on a Sixth Avenue street corner in Manhattan, Smith drew a sizable crowd on Monday. Some even knew the lyrics of Smith’s 1988 single and fervently sang along with the veteran rocker. Smith, who briefly took off her mask to sing, made sure to keep a safe distance from those around her, but the passion in her body language was readily apparent.

The 73-year-old became especially fired up during the song’s rousing end. “The power to dream to rule/ To wrestle the world from fools/ It’s decreed the people rule!” a defiant Smith declared, her hand balled up into a mighty fist. She capped off the entire thing with a message that neatly summarizes her Dream of Life track: “Use your voice, vote!”

Video footage of Smith’s performance was first posted by Instagram accounts Zoe Leonard Studio and Joy to the Polls. Watch it in full down below.

Earlier this year, Smith assembled a star-studded virtual performance of “People Have the Power” to promote Pathway to Paris. She also sang for Johnny Depp to celebrate his birthday.