Tom Morello: "Not exactly what we had in mind" 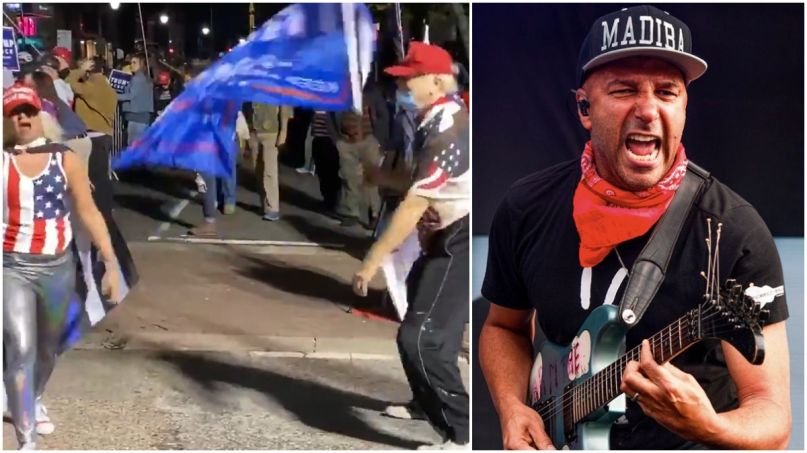 In the latest edition of Onion-tier satire manifesting itself into existence, a couple of Trump supporters in Philadelphia were seen dancing and singing along to Rage Against The Machine’s “Killing In The Name” while protesting the Pennsylvania vote count. On Twitter, RATM guitarist Tom Morello responded with the textual equivalent of a face-palm: “Not exactly what we had in mind”.

The Trump supporters were vigorously jumping and screaming along to the famously anti-fascist band’s most blatantly anti-authoritarian, anti-police, anti-racist song in their catalog while decked out in truck-stop patriotic garb. One person waved a giant Trump flag while another had on a MAGA hat and a Blue Lives Matter flag draped over her shoulders like a cape. In the background were homemade signs with slogans like, “Stop The Steal”, a likely reference to Trump’s delusional insistence that Pennsylvania and other states where mail-in-ballots swung to Biden were actively stealing the election from him.

This type of conspiratorial nonsense is the sort of standard-fare lunacy we’ve come to expect from the MAGA cult, but the fact that these two were trying to twist the lyrics, “You justify those that died/ By wearing the badge/ They’re the chosen whites,” into a pro-Trump message takes the irony to unprecedented levels. Again, the woman in this video was literally wearing a pro-police flag while screaming the words, “Some of those that work forces/ are the same that burn crosses.” Absolute gold.

Of course, this is by no means the first instance of Trump and his supporters bringing satire that would be too on-the-nose for TV writing into reality. Up through election day, Trump continued to play the Village People’s legendary queer anthem “Macho Man” at his rallies (despite the group asking him not to), taking the distinctly pro-LGBTQ track at face value and treating it like some sort of Chad psalm.

On top of that, when Trump was in the hospital last month for contracting COVID-19, his dimwitted supporters blasted Springsteen’s “Born In The USA” outside of Walter Reed Medical Center, singing along to a blatantly anti-war protest song to honor their beloved Commander In Chief. Irony is obsolete, folks.

Check out a couple different angles of these machine rager’s below.

Not exactly what we had in mind https://t.co/RydKGCk9RA