Who Is Bo-Katan? The Mandalorian, Explained 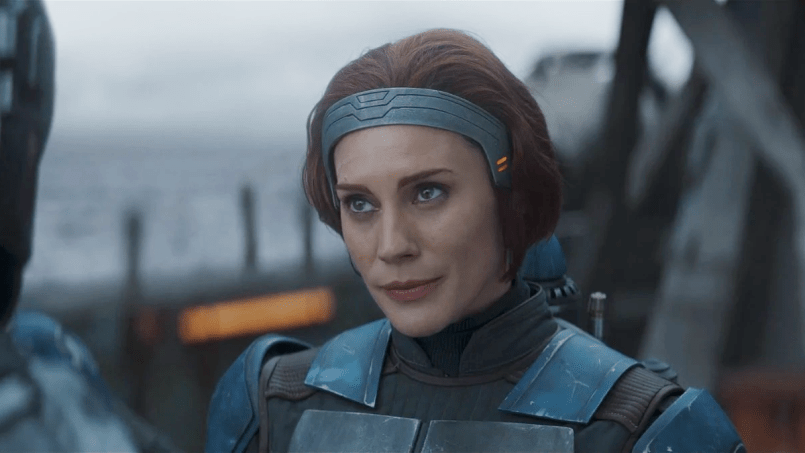 While Season 2 of The Mandalorian has made good on its promise of more fun, self-contained episodic adventures for Din Djarin and  The Child, this week’s episode — “The Heiress” — finally saw some momentum on the broader story arcs of the season.

After besting a krayt dragon on Tatooine with Space Raylan Givens, and fighting off some space spiders on an icy planet (thanks, Baby Yoda!), the Mandalorian finally meets up with more of his own kind and manifests some of the Star Wars animated series’ most popular characters in live-action.

But amid all the cute Baby Yoda moments (Fun fact: he likes chowder!) and a rollicking space heist about an Imperial arms transport, we learn even more about the broader fight Mando might be headed towards later in the season. Questions lead to answers, which lead to more questions — this is the Way.

“The Heiress” sees Mando run into another faction of his people, a small hit squad led by Mandalorian Bo-Katan Kryse (Battlestar Galactica’s Katee Sackhoff). If you’re not familiar with the animated shows, Bo-Katan was a fixture on both The Clone Wars and Rebels, a Mandalorian freedom fighter who spent time on both sides of the conflict (and was voiced by Sackhoff in both shows).

At first, she worked with Count Dooku and Darth Maul during the Clone Wars to restore their people’s warrior natures, before being betrayed by Maul, who took control of their home planet of Mandalore. (Later, in Rebels, Bo-Katan eventually wrested back control of Mandalore from the Empire, uniting the disparate clans under her leadership.)

By the looks of things, her rule quickly fell apart in the intervening years between Rebels and The Mandalorian, presumably deposed during the Great Purge (where the Galactic Empire killed most of the Mandalorians, stole their beskar, and force the rest of them into hiding).

Why can the other Mandalorians take off their helmets, but Din can’t?

One of the lingering questions Mandalorian fans have had since the show aired is, “Why can’t Mando take his helmet off?” For him, it’s a major tenet of the Mandalorian Creed — no one must see his face. But in both the animated shows and “The Heiress,” Bo-Katan and her team are more than willing to take off their helmets (and show off Sackhoff’s incredible crimson wig). Why’s Mando the exception?

It’s here that we learn that Mando’s people, the Children of the Watch, are a “fanatical religious cult that broke away from Mandalorian society.” Their goal, she says, was to re-establish the ancient way — presumably, this means their creed of solitude and isolation (and disconnection from others) is a fundamentalist offshoot of the way modern Mandalorians live.

Is Din the product of a fanatical religious cult?

Yup, probably! And this reveal gives us a wonderful tease that the Mandalorians are far more disparate and splintered in ideology than one might assume. (And, if Din starts to question the values with which he was raised, might give the show more opportunities to show off Pedro Pascal‘s handsome mug.)

It’s also another layer onto the heartbreaking tragedy of Din’s life: the Watch saved his life but also trapped him in a system of oppressive emotional stoicism and control that he’ll have to break out of to become whole. (I can see the “The Mandalorian is about toxic masculinity” thinkpieces now — oh wait, they’re already here.)

What does Bo-Katan want with the Darksaber?

The Darksaber, for those who don’t know, is a black-bladed lightsaber that essentially serves as the Mandalorian’s Excalibur — they who wield it have the command of the Mandalorian people. In Rebels, Bo-Katan reluctantly took ownership of the Darksaber to lead its people; as the end of Mandalorian season 1 showed us, it’s now in the hands of Imperial Moff Gideon (Giancarlo Esposito).

As Bo-Katan’s interrogation of the Imperial officer captaining the transport they’re hijacking (hi, Titus Welliver!) tells us, she now knows that Gideon has the Darksaber, and that’s going to be the next thing to add to her vision board for taking back her planet for the Mandalorians.

Will the Razor Crest ever be the same?

On to less arc-consequential questions: Mando’s trusty ship, the Razor Crest, took a real beating last week, limping to Trask with nothing but a patched-together cockpit and a few spurts of fuel. (And its eventual unguided landing was, let’s say, far from graceful.) What’s more, it looks like mechanics on Trask are just about as effective as those on Earth — a thousand credits later, the Mon Calamari fix-it guy gives the Crest the most cursory patch job ever, the ship almost literally looking like it’s held together by string and netting.

But at least it’s up and running, even if it’s shakier than your uncle’s T-Bird he’s been driving since 1978. Still, do we think Mando will give the Crest the full work-over it needs, or can we expect our heroes to limp around a galaxy far, far away in an interstellar lemon? (I shudder to think of the Blue Book value.)

Where are Mando and Baby Yoda going next?

In exchange for helping Bo-Katan and crew take that Imperial transport (and all the delicious guns they can use to fuel their rebellion), Mando gets the next bread crumb on the trail to returning Baby Yoda to his people: the city of Calodan on the planet Corvus, where he’ll run into an old friend of Bo-Katan’s — former Jedi (and major character in the animated shows) Ahsoka Tano.