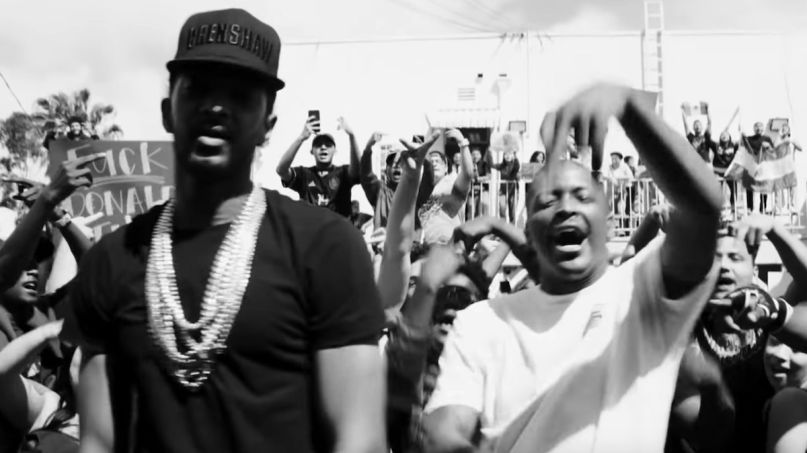 Nipsey Hussle and YG in the "FDT" video

When YG and Nipsey Hussle got together for “FDT (Fuck Donald Trump)”, they likely hoped the track would become a funny footnote for 2016. Unfortunately, it grew into something of a resistance rallying cry following Trump’s election. Now that it seems likely he’ll be a one-term president with Joe Biden replacing him, however, “FDT” has again seen a huge spike in sales and streams.

Complex notes that “FDT” hit No. 1 on the US iTunes chart on November, 7th, the same day Billboard reports the song was downloaded 3,000 times, an increase of 740% from just the day before. Of course, “FDT” was already on the rise before networks began calling the election for Biden on Saturday. In the four days from the election to November 6th, “FDT” saw a 233% bump in downloads (2,000) over the previous four-day span.

The hip-hop hit wasn’t alone in soundtracking the weekend’s celebrations. Songs that played during Biden’s and Vice President-elect Kamala Harris’ victory speeches also saw a rise in streams and downloads. The biggest gains went to Harris’ walk-out music, Mary J. Blige’s “Work That” (a 5,642% bump with 2,000 downloads), and Coldplay’s “A Sky Full of Stars” (5,353% at 1,000 downloads), which played during the fireworks finale.

On the other side of the “FDT” coin, Bryson Gray’s “Trump Is Your President” had 1,000 downloads on election day, with another 2,000 coming over four days prior. However, those sales numbers plummeted 79% by November 4th, with a general decline ever since.