Alice in Chains also performed, as did members of Pearl Jam and Soundgarden 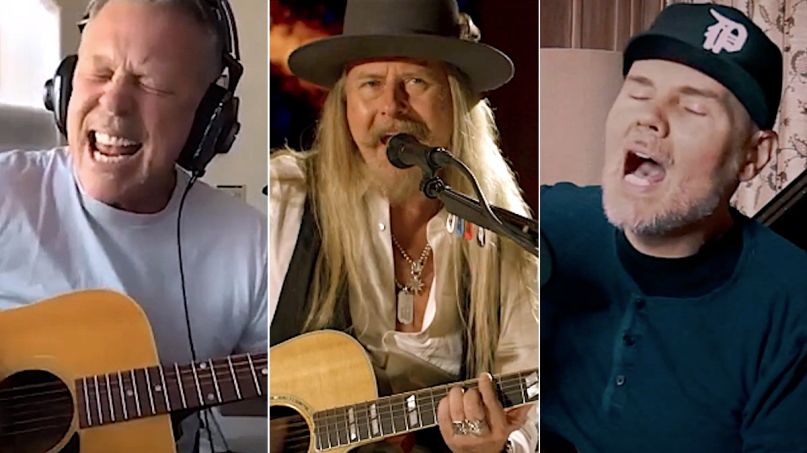 Alice in Chains were honored with the Seattle Museum of Pop Culture’s Founders Award on Tuesday night. The occasion was celebrated with a virtual ceremony that became the ultimate tribute to the grunge legends.

The event was a true Seattle party, featuring Alice in Chains and many of their colleagues and friends performing AIC songs from various locations. Among the list of performers was Metallica, Corey Taylor, Dave Navarro, Ann Wilson and Nancy Wilson of Heart, Korn, The Smashing Pumpkins’ Billy Corgan, Mastodon, Mark Lanegan, Tad Doyle, and many more.

For the ardent Alice in Chains fan, the livestream was required viewing, taking on a cinematic spectacle with the band themselves as the central protagonist in a grand, tumultuous story that began 30 years ago with the release of Facelift. Even the reporter Nona Weisbaum — played by AIC guitarist-singer Jerry Cantrell — showed up for the occasion, proving that this was no ordinary award show, but a true retrospective of Alice in Chains.

The show kicked off with Alice in Chains playing a haunting “unplugged”-style rendition of “Your Decision”. Surrounded by decadent screen fixtures and swooping cameras, the band members were socially distanced on the stage, creating a striking minimalism that lent further emphasis to the music and the individuals playing it. The program only featured two Alice in Chains performances (they helped conclude the show with “No Excuses”), but we could easily watch a full concert in this vein.

“Alice in Chains was thrilled to be honored and, upon receiving the award,” Cantrell said in a press release. “This band started 33 years ago, three and a half miles down the road in Ballard…it’s a pretty amazing journey that we’re still on. There are so many great artists and friends who have contributed shout-outs and performances — it’s been a really cool experience and William [DuVall], Sean [Kinney], Mike [Inez], and I would like to thank everybody. And, as we accept these awards, we want to remember our bandmates as well, Layne Staley and Mike Starr. Wow, what a night!”

Thankfully, the cover renditions were of startlingly high quality — no surprise given the A-list participants involved, many with personal connections to Alice in Chains and their story. When Mark Lanegan sang “Nutshell”, we couldn’t help but recall his poignant friendship with the late Layne Staley, as depicted in raw detail in Lanegan’s recent memoir. The same went for Heart’s Ann Wilson, who was also close to Staley. She tore the house down with her cover of “Rooster”.

“We got that vital spark you can only have when you’re together, together in the same place, making music,” Wilson said. “It was so much fun. We were all masked up, except me when I was singing or in the isolation booth. Here come the Rooster!”

Soundgarden’s Kim Thayil lent his hand to covers of “Angry Chair” and “It Ain’t Like That”, while Lily Cornell Silver, the eldest daughter of the late Chris Cornell, made her first public performance with a cover of “Black Gives Way to Blue”.

Elsewhere, Korn and Metallica applied their trademark sounds to two vastly different takes on “Would?” Where Metallica took an acoustic approach, Korn put their nu-metal stamp on it.

“We are long-time fans of Alice in Chains and had the pleasure of getting to know all of the guys when we toured with them a couple of summers ago,” the members of Korn said in a collective statement. “It was an honor to cover ‘Would?’ and we had a lot of fun putting our own spin on it.”

As with the story of Alice in Chains, the heavy moments were sprinkled with tender ones. A particularly notable clip showed the members of the band visiting MoPOP’s Jimi Hendrix exhibit, each member wearing a face mask. DuVall geeked out over the hand-decorated guitars, and Cantrell gave a sincere monologue on the importance of his Seattle guitar god and preserving Hendrix’s history.

As previously stated, the award ceremony is a must-see for Alice in Chains and grunge fans in general. Few livestream events have gathered such an abundance of major talent, a further testament to the band’s influence and musical legacy. In addition, the event has raised $600,000 and counting for MoPOP.

The performances have been collected as part of an Amazon Originals compilation, while donations to Seattle’s Museum of Pop Culture (MoPOP) can be made here.

You can still check out the full award ceremony in the YouTube player below, followed by the setlist.