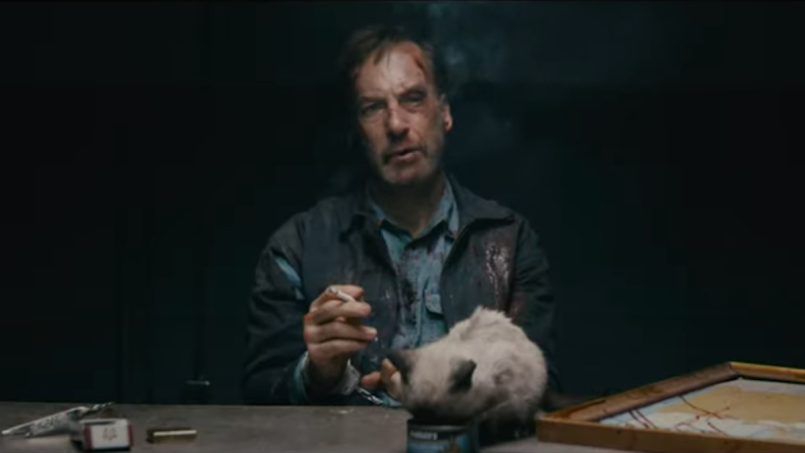 The new red band trailer for Nobody starts with Bob Odenkirk taking a punch on the chin. After that, he handles most of the punching himself.

The Better Call Saul star plays Hutch Mansell, a worn-down suburban father. He loses the respect of his wife and children when he allows burglars to rob the house without putting up a fight. But this dad is no deadbeat. As he explains,

“I used to be what they called an Auditor. The last guy anyone wants to see at their door because it meant you didn’t have long to live. But I left it behind to start a family. I might have, uh, overcorrected.”

Mansell rediscovers some of those latent skills when a group of drunk bullies harass a woman on a bus. From there, the mild-mannered dad disappears, replaced with a tornado of punches, gun shots, and squealing tires. It’s not just about protecting his family, it’s about replacing what was lost: his dignity, as well as his daughter’s kitty-cat bracelet. Amidst the copious violence, Mansell screams, “Give me the goddamn kitty-cat bracelet!”

If you’re a fan of Kolstad’s violent world building, look out for his characters to continue fighting in John Wick 4 and John Wick 5, which will film back-to-back next year. Additionally, a John Wick rollercoaster is coming to Dubai in 2021.

In related news, Odenkirk appears in the latest season of our podcast Assembly, which follows fellow comedian David Cross as he crafts his new standup show. Listen and subscribe to the season now.