What’s Up With Boba Fett’s Armor? The Mandalorian, Explained

And Baby Yoda needs more help than ever! Here are the answers to your questions... 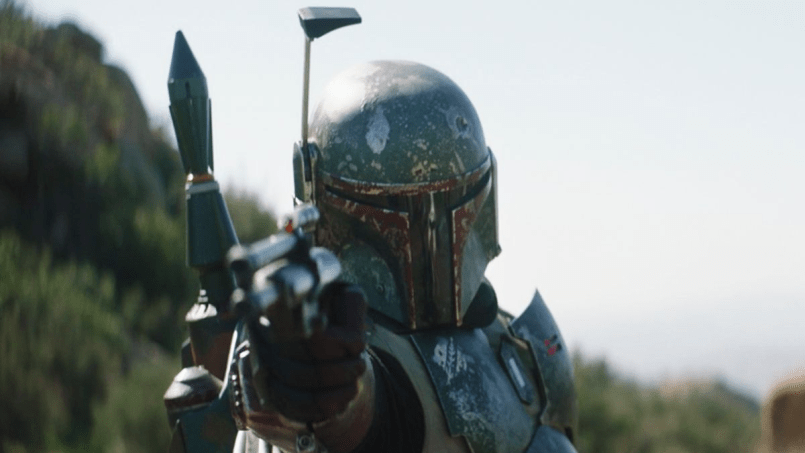 If The Mandalorian Season 2 were a feature film, this week’s episode, “The Tragedy”, would set us firmly in the mid-point — that moment where all is lost, doom befalls our heroes, and the audience wonders how they’re going to get out of this particular pickle. It’s one of the shorter episodes in the season at 33 minutes, but a lot goes down in that jam-packed half hour: Boba Fett! Grogu gets Jedi-napped!

Of course, all these developments are packed tightly into an action-heavy chapter courtesy of director Robert Rodriguez, filled with nail-biting developments, shocking twists, and more than a few Easter eggs (as per usual). So let’s strap on our jetpacks and dive in. Again, it goes without saying that there are some major, major spoilers ahead.

You must be cautious.

Will Mando Really Give Up The Child?

Last week, Ahsoka Tano told Mando (Pedro Pascal) to bring The Child Formerly Known as Baby Yoda to the planet Tython, where the ruins of a Jedi Temple lay that could give li’l Grogu the chance to connect with other Jedi. It’s a bittersweet development, as we see in the ep’s opening minutes; Din’s really bonded with Grogu, and the little chuckles he gives when seeing the child respond to his own name (and as they play Force-catch with Grogito’s favorite ball) are absolutely heartwarming. He’s such a proud papa!

While he was tasked with returning Grogu to his people, it’s clear that Mando has grown attached to the little guy. As he explains that the child is too powerful to be trained by a simple Mandalorian, you can hear him convincing himself that it’s the right thing to do. It’s a bittersweet moment, one made even more tragic (hey, that’s the name of the episode!) by what happens later.

What’s the Deal With That Henge on Tython?

Before they can even worry about that though, they set down on Tython in the Razor Crest and Mando brings Grogu up to the seeing stone at the center of a mysterious henge on the planet. He sets Grogu down, who reaches out with the force and is suddenly surrounded by a glowing blue light that reaches up to the sky; he’s reaching out to find other Jedi, and Mando can’t reach through the beam to touch him without getting blown back.

It’s not long, though, before trouble comes in the form of Slave I, the iconic, vertically-oriented ship belonging to, you guessed it, Boba Fett (Jango Fett actor Temuera Morrison, whom we saw in the closing seconds of the season premiere). Decked out in robes and armed with a gaffi stick and long rifle from some Tusken Raiders, he’s come for his armor, which Mando took back from Cobb Vanth in the opener.

Ostensibly, Boba only wants the armor. There’s just one problem, though; he doesn’t claim himself to be a Mandalorian, which sticks in Din’s craw, as only members of the Creed are entitled to it. (Here’s another way his rigid fundamentalist upbringing is set to cause him more trouble.)

Lucky for Boba, he didn’t come alone — that’s right, former assassin and sniper Fennec Shand (Ming-Na Wen) is along for the ride, which confirms that the boots we see walking up to her presumed-dead body at the end of “The Gunslinger” last season were Boba Fett’s. Turns out he saved her life, and in exchange, she’s pledged to him in his mission. Good thing, too, as she proves mighty useful against the hordes of Imperials loyal to Moff Gideon (Giancarlo Esposito) who show up shortly afterward to interrupt their Corellian standoff.

What follows is a tense but exciting firefight on the hills leading up to the temple, with Fennec and Boba raising mighty hell on two dropships worth of troopers. Both get some fun moments to shine, from Boba shattering stormtrooper armor with his gaffi stick to the fancy flips and boulder-rolling mayhem Fennec gets up to. The E-Webb blaster cannon makes another appearance after introduced with such menace in “Redemption” last season, Rodriguez and writer Jon Favreau treating it with the same destructive import as the Gatling gun in Sam Peckinpah’s The Wild Bunch.

Rodriguez escalates the action here wonderfully, from just showing off Fennec and an un-armored Boba, to throwing Mando in the mix, to giving Boba his armor back and watching him raise even more hell as a result.

What are Dark Troopers?

While Mando, Boba, and Fennec make short work of the troopers, Gideon (hovering in upper atmosphere in an Arquitens-class light command cruiser, which looks like a Star Destroyer but is really a holdover from Rebels) sending down his secret weapons: Dark Troopers. While we saw them at the tail end of Chapter 11 a couple of weeks ago, here we finally see them in the cold light of day, robotic stormtrooper droids with black beskar-like armor and jetpacks who seem a whole lot meaner and nastier than your workaday troop.

Dark Troopers are a deep cut even for Star Wars lore, created for the mid-’90s LucasArts game Star Wars: Dark Forces, a Doom clone where you played spy and mercenary Kyle Katarn. The story for that game involved taking down the Dark Trooper program before it went offline; evidently, Gideon has resurrected it. We don’t even get to see our heroes take them on before four Troopers snatch up Grogu and take him up to Gideon’s ship.

The Razor Crest is Destroyed?!

Unfortunately, Grogu’s not the only important thing Mando loses this episode — an orbital bombardment from Gideon’s cruiser absolutely destroys the Razor Crest, Mando’s (and our) home for the series thus far. It’s almost a bigger shock than Grogu’s capture; we know in our heart of hearts that Mando will get him back. But the Crest is gone for good, made even more tragic considering the harsh ride it’s had this season. (Plus, the only things that survive are the beskar staff Ahsoka gives Mando, and — cue the tissues — the little metal ball that’s symbolized Mando and Grogu’s growing relationship.)

Is the Empire Truly Back?

“They’re back… the Empire. They’re back.” Those horrified words coming out of Boba’s helmet as he sees Gideon’s cruiser feel particularly ominous; up to this point, we’ve been convinced that the New Republic rules the galaxy, and that what’s left of the Empire are a few errant warlords. But something in Boba’s voice convinces us that the Empire is truly returned, at least in some diminished format on the Outer Rim Territories. In trying to rescue Grogu, Mando might just have to involve himself in even larger intergalactic affairs.

Is Boba Fett a True Mandalorian?

At least he’ll have help: in exchange for the armor, Boba has pledged to protect The Child along with Mando, and he (and Fennec) plan to hold up that end of the bargain. It helps, of course, that Boba shows Mando his armor’s “chain code,” which reveals to Mando that, while Boba did not take the Creed, Jango did; he was a foundling just like Din and fought in the Mandalorian Civil Wars, which is good enough for Mando.

That reveal is fascinating, considering the way other Star Wars properties have treated the status of Boba Fett’s legitimacy as a Mandalorian. Characters in The Clone Wars have implied in the past that Jango isn’t a true Mandalorian, and that he stole or scavenged his beskar armor. But this episode backtracks that a bit by giving him membership via the Children of the Watch, which further elaborates on the complicated social fabric of Mandalorian society.

What Does Moff Gideon Want with Grogito?

But what about our precious child? Well, Gideon seems bemused by him, especially as his time on the seeing stone has seemingly gotten him more in touch with the Force. (Judging by the way he tosses those troopers around with Force Grip, the Dark Side might be a path that tempts him.) As he gives instructions to his second in command, we learn a bit more about what purpose he — and the mysterious “Dr. Pershing” — may have for Grogu: “Let him know we’ve got our donor.”

Donor is an interesting choice of words here. What would Grogu be donating? Could it be that the Empire is working on a way to transfer Force sensitivity from one being to another? And poor Grogito is set to be the guinea pig. Hurry, Mando, you boy is in trouble!

How Will Mando Get The Child Back?

By the looks of it, the last two episodes of the season will be an epic heist, with Mando, Boba, and Fennec at the center of it. We see them head back to Nevarro to visit Cara Dune (Gina Carano), who refuses to help at first (given her new rank in the New Republic), until Mando tells her, “They’ve got the kid.” He also asks about Mayfeld (Space Boston’s Bill Burr) from last season’s “The Prisoner,” so we can presume the Rebel sharpshooter will join the team. Plus, maybe we’ll get some help from Bo-Katan and Ahsoka by season’s end? Maybe even Frog Lady can help out!

Either way, we’re gearing up for a rousing, climactic showdown for The Mandalorian season 2, and it’s exciting to see the show slowly morph from its adventure-of-the-week format to something more focused and plot-driven. Stay strong, little Grogito; papa’s coming to get you!