A pair of early stocking stuffers from the K-pop megastars 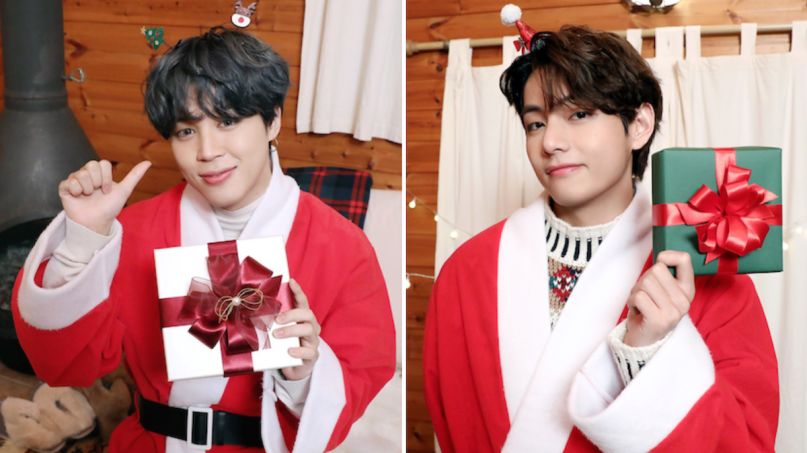 You better not pout, ARMY members, because BTS’ Jimin and V have gifted fans with a pair of new Christmas songs, “Christmas Love” and “Snow Flower”.

Jimin’s “Christmas Love” is a snappy pop number that shines as crisply as a blanket of fresh snow. The “love” of the track title isn’t about a specific person, however, and more about the feeling this time of year brings to many. Roughly translated from Korean, Jimin sings, “Christmas I love you/ Oh, you’re the one forever/ I wish it was today.”

As he explained in a post on the official BTS blog (again, translated from Korean), Jimin wrote the song to reconnect with his childhood memories of the holidays:

“As we grew, feeling responsibility for what we have, that responsibility made us, who were innocent, mature and I think that enables us to hide our feelings a bit. But I believe that we still have those feelings in us so every once in a while, even if it’s childish, what do you think about expressing those feelings? I hope that day would be today.”

For “Snow Flower”, V is joined by Peakboy, who plays guitar and drums in addition to adding his own vocals. A slower ode to the beauty of the season, it finds V singing about how “Christmas without you would just not be Christmas at all/ Bright mistletoe up above us/ It’s just you and me.”

“This year feels like a stopped time, and as the end of the year approaches, I think there will be a lot of people with increased anxiety and depression. For today, I hope that white flowers will come down to your hearts and feel a little warm comfort and happiness.”

In addition to “Snow Flower” and “Christmas Love”, our 2020 Band of the Year BTS previously shared a holiday remix of one of the year’s best songs, “Dynamite”. The group’s Jin also released the solo track “Abyss” earlier in the month.