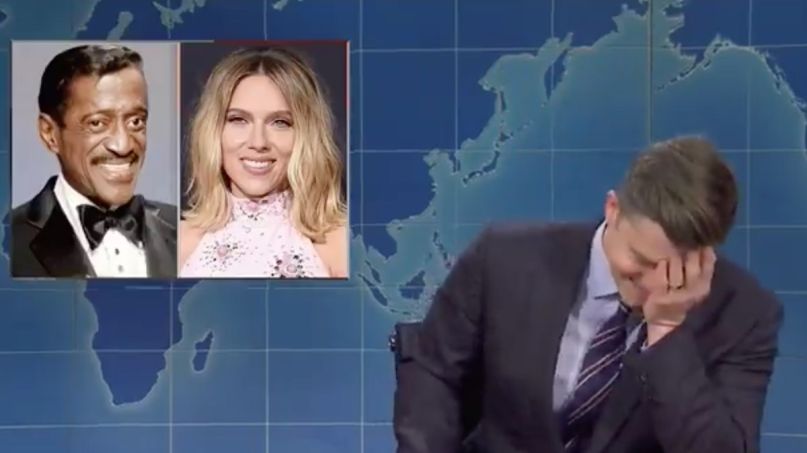 Colin Jost reads a joke about his wife Scarlett Johannson, photo via SNL

As has become tradition for Saturday Night Live’s Christmas show, Weekend Update co-anchors Colin Jost and Michael Che carve out a segment to read jokes they’ve written for each other without seeing them beforehand. It typically manifests in some hilariously cringe moments, like when Jost is forced to read jokes that make him look like a racist asshole. For tonight’s episode, however, Che actually got Jost to roast his own wife.

In recent years, Scarlett Johansson has twice faced criticism for taking on roles she had no business playing. In 2017, she starred in an adaptation of the Japanese manga Ghost in the Shell. The following year, she was cast to play a transgender man in a film called Rub and Tug, but ultimately dropped out of the project amidst backlash.

That was the basis for Che’s joke about Johannson, which was read by her own husband, Jost. “It was announced that Creed singer Scott Stapp would be playing Frank Sinatra in an upcoming movie,” Jost began. As the cue card flipped and Jost saw the punchline, he could hardly contain his composure. “But the good news is — Sammy Davis Jr. will be played by Scarlett Johansson.”

Yes, Michael Che did just get Colin Jost to tell this joke about his wife ScarJo on #SNL pic.twitter.com/ZCIISSafif