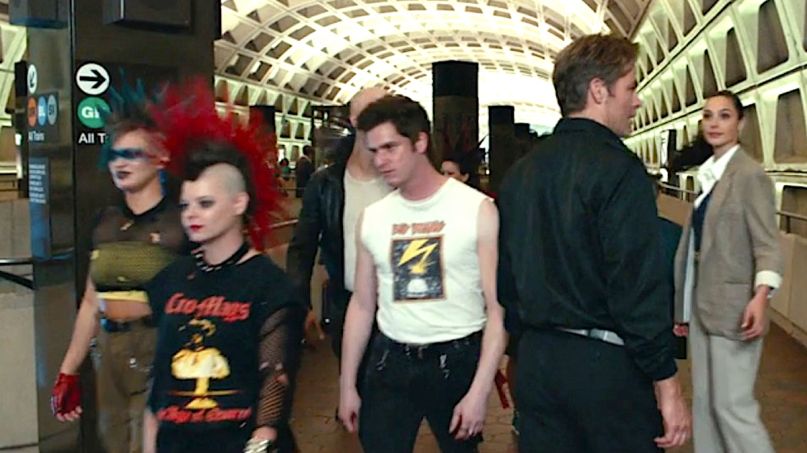 Eagle-eyed hardcore fans had some beef with the historical accuracy of a Cro-Mags T-shirt in the new movie Wonder Woman 1984, but the band’s longtime singer quickly put those questions to rest. In fact, it was John Joseph who sent the shirt to director Patty Jenkins for use in the film.

The scene in question shows a group of punk rockers walking through Washington, D.C.’s Metro station, sporting Mohawks and band t-shirts. One of the punks is donning a Bad Brains shirt, while another is wearing a tee featuring the artwork from the Cro-Mags album The Age of Quarrel. Problem is the film is set in 1984, but that Cro-Mags LP didn’t arrive until 1986. That led hordes of hardcore punk fans to hit social media to call out the movie for a fashion faux pas.

However, Joseph was quick to point out that the T-shirt was indeed accurate, and that he was the one who picked it out for the movie. Not only that, he helped Jenkins get her first-ever directing gig. As the vocalist explained on Instagram:

“Had about twenty people tell me about this. Patty Jenkins Director/Writer (Monster – Wonder Woman etc.) is a good friend since the 80’s – she asked me to send her a Cro-Mag shirt for the new Wonder Woman 1984 released today. I sent her this “Age of Quarrel” tee-shirt. The original album (black cassette) was recorded in 1984. Me and Parris (guitarist) paid for the recording. His father owned a pressing plant in Nashville and pressed up the tapes. Here’s some trivia too. – I got Patty her first directing gig. It was for the band Leeway – Three Wishes video. She went to film school in NYC but grew up in DC – is a huge @badbrainsofficial fan too! #wonderwoman1984″

Cro-Mags split into two entities following a legal settlement in 2019. Bassist-singer Harley Flanagan won the rights to the Cro-Mags moniker, and recently released In the Beginning, the first album under the Cro-Mags name in 20 years. Meanwhile, Joseph and fellow classic member Mackie Jayson are allowed to tour and record under the name Cro-Mags JM.

Joseph, who is also an author and Iron Man triathlete, appeared on the latest episode of the YouTube series The New York Hardcore Chronicles Live over the weekend. Check out the interview following his aforementioned Instagram post below.