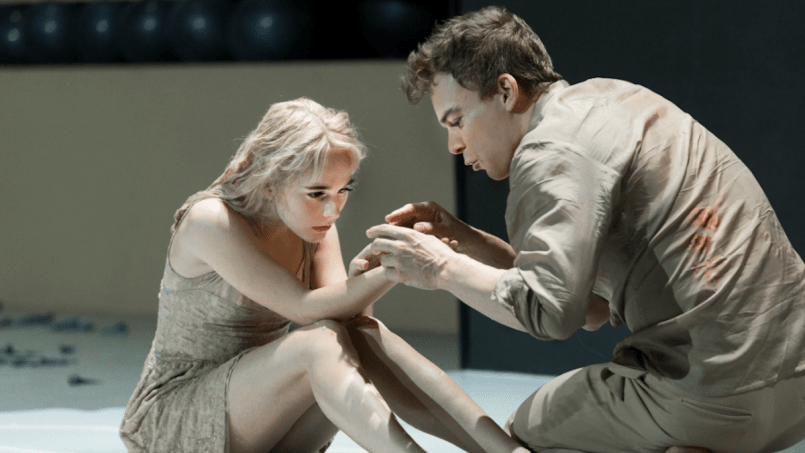 A filmed recording of the David Bowie musical Lazarus will be streamed next month to coincide with the late musician’s 74th birthday as well as the fifth anniversary of his death.

One of the final works created by Bowie prior to his passing, Lazarus premiered off-Broadway in late 2015. It was then staged at London’s King’s Cross Theatre the following year.

The story is inspired by the Bowie-starring film The Man Who Fell to Earth, which itself was based on a 1961 novel by Walter Tevis (The Hustler, The Color of Money, The Queen’s Gambit). The musical was directed by Ivo van Hove, and featured Michael C. Hall (Dexter) as alien Thomas Newton and Broadway ingenue Sophia Anne Caruso as his muse.

The corresponding soundtracks spans Bowie’s entire discography, from early hits like “Life on Mars?” to the final album that he he wrote in response to his own impending death, ★ (Blackstar).

The stream, which captures a late 2016 performance in London, will include multiple showings across four different zones running from January 8th to January 10th. Tickets start at £16, or about $21.50 USD, and can be purchased through the event’s website.

Also happening on what would have been Bowie’s 74th birthday, his estate will share previously-unreleased covers of John Lennon and Bob Dylan, while artists including Trent Reznor, Billy Corgan, and Perry Farrell will participate in a livestream tribute. Last month saw an official release of Bowie’s cover of “Cosmic Dancer” with Morrissey.