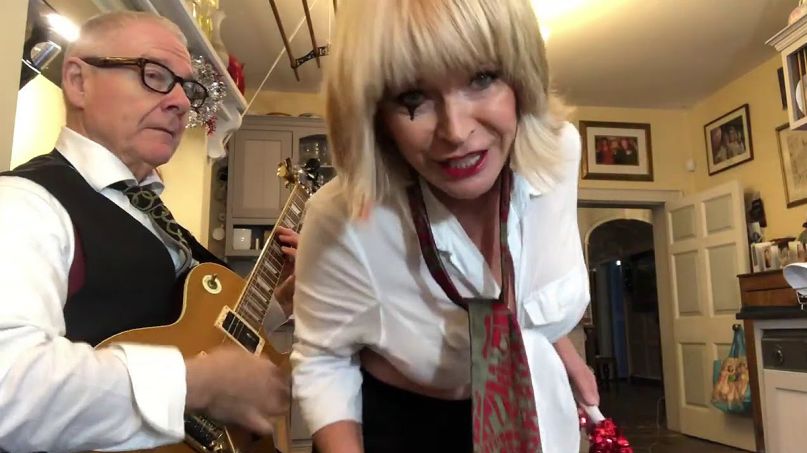 You may remember the couple’s utterly bizarre Halloween rendition of Black Sabbath’s “Paranoid”, which saw Fripp playing the song on guitar while Willcox sang and danced in what appeared to be a prison cell.

Although the new covers aren’t quite as unconventional as the Sabbath performance, they still showcase the idiosyncratic talents of each artist. Fripp tends to handle most of the music, while Willcox sings and supplies interpretative dances, including a one-person mosh for Nirvana’s “Smells Like Teen Spirit” and a Britney Spears-style routine for Cooper’s “School’s Out”.

Considering Fripp is the mastermind behind the twisting arrangements of prog behemoth King Crimson, one can only wonder what it’s like for him to learn relatively worldly compositions such as Guns N’ Roses’ “Sweet Child O’ Mine” and the Sex Pistols’ “Anarchy in the UK”, which is about as far away from prog as you can get on the rock music spectrum.

Even still, Fripp and Toyah are taking the ongoing covers series seriously, as the videos attest. That take on Slash’s solo on “Sweet Child O’ Mine” is precise — down to the gold Les Paul — with Fripp’s static facial expression and the surrounding angel ornaments conjuring that eerie dissonance we remember from the “Paranoid” cover.

Cover songs have become a way for quarantined artists to stay active and sharp, especially in the heavy music world. From Two Minutes to Late Night’s “Bedroom Covers” series to the young virtuoso Nandi Bushell engaging in drum battles with Dave Grohl, cover tunes have provided fans with an abundance of entertainment in the absence of live shows.

Check out the aforementioned covers from Robert Fripp and Toyah below. For more, visit the latter’s YouTube channel.