In a since-deleted post, the Trump-loving rapper said, "All 2020-21, I ain't wearing no mask. I ain't gotta wear no fucking mask. Corona's fake. Bye!" 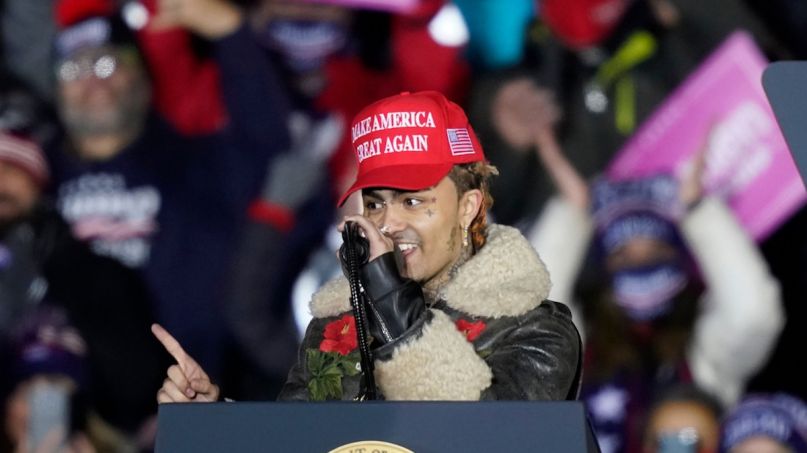 A recent JetBlue flight ran into some unexpected turbulence when rapper Lil Pump refused to wear a mask. Now, according to TMZ, the Trump-loving MC has been banned from flying JetBlue.

On Saturday, December 26th, Lil Pump boarded a plane bound for Los Angeles from Fort Lauderdale. Audio recordings from the flight deck reveal that midway through the trip, Lil Pump not only removed his mask, but became verbally abusive with the poor flight attendants tasked with getting it back on. Still maskless, he began coughing and sneezing into a blanket, perhaps purposefully trying to make his fellow passengers uncomfortable. The flight deck apparently requested that police meet them at LAX, since the rapper had to be dealt with “firmly.”

TMZ reports that Lil Pump eventually calmed down and put his mask back on. In the end, LAX Airport Police did not arrest him, but reps from JetBlue say he’s been grounded from future flights.

Lil Pump subsequently took to Instagram to blast JetBlue and vow not to wear a mask in the future. “Fuck JetBlue and fuck everybody that working there,” he said in a since-deleted post. Later, he added, “All 2020-21, I ain’t wearing no mask. I ain’t gotta wear no fucking mask. Corona’s fake. Bye!”

Among the hip-hop community, Lil Pump had been one of Donald Trump’s most steadfast supporters. The President repaid him by forgetting his name and introducing him at a rally as Lil Pimp. The Trump-Pump election saga ended in the most predictable way possible, with the rapper failing to register to vote.

It appears Lil Pimp was mad he was turned away from a flight for not wanting to wear a mask. The first video in the story he said “F Jet Blue” pic.twitter.com/8dC25Ylw3h