Plus, watch a teaser for the animated series What If...? 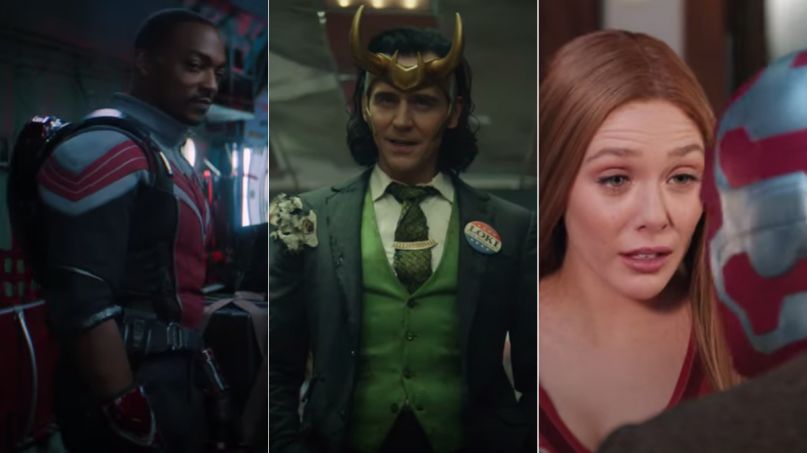 Just like with the massive Star Wars news dump, there were plenty of takeaways for Marvel fans during Disney’s Investor Day on Thursday. Trailers were revealed for the first three Marvel Cinematic Universe Disney+ series: WandaVision, The Falcon and the Winter Soldier, and — yes– Loki.

First up was WandaVision, which received its second full-length trailer. The preview gave a lot of new looks at the decades-hopping TV tropes we long knew would be at the show’s center. However, the danger seems far more present in this teaser, and the ominous undertones are heightened. We’re also given an extended look at Teyonah Parris as the adult Monica Rambeau, a role that she’ll be reprising in Captain Marvel 2.

Next came The Falcon and the Winter Soldier, set to arrive on the streaming service on March 19th. Marvel’s Paul Feige described the series as “a movie told in six parts,” and the trailer certainly has those cinematic vibes, with massive action pieces that really show of Sam Wilson’s (Anthony Mackie) new suit.

Rounding out Marvel’s mostly finished Disney+ projects was Loki, which picks up where we last saw Tom Hiddleston’s character in Avengers: Endgame. Only now, he’s drawn the attention of Owen Wilson and the Time Variance Authority, who send him on a path best described as a reality-hopping crime-thriller. And… is that a Soul Stone-trapped Black Widow we spot?

Most surprising of all, Marvel actually had footage to share from its highly anticipated Ms. Marvel series. Because production is still in the very early stages, there wasn’t a lot to see, but we do get our first look at newcomer Iman Vellani as Kamala Khan. It was later revealed that Vellani will also appear in the upcoming Captain Marvel 2 — which makes sense, because where do you think she gets the name Ms. Marvel?

Finally, there was an extended first-look at the animated What If…?, which explores a number of alternate MCU timelines. For example, there’s King T’Challa (voiced by the late Chadwick Boseman) as Star-Lord, and Peggy Carter (Hayley Atwell) as the first super soldier — Captain Britain. Jeffrey Wright voices Utau The Watcher, the guide through this multiverse-hopping anthology.

Watch all the exciting new footage below. To catch all the shows, make sure to sign up for Disney+.

The Falcon and The Winter Soldier: