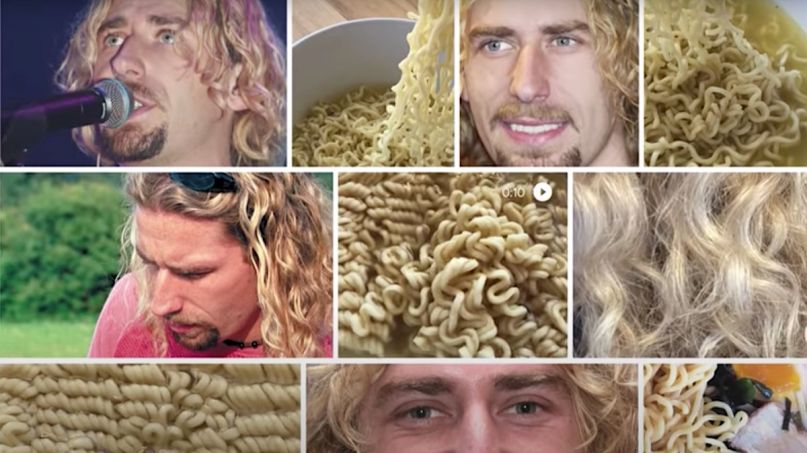 Nickelback have long been one of rock’s most parodied acts, but the latest mockery of the band comes courtesy of Nickelback themselves. The Canadian rockers have hilariously spoofed their own “Photograph” video in a new commercial for Google Photos.

The multiplatinum group’s 2005 music video has been the inspiration for countless memes and even a Donald Trump tweet that was eventually blocked by the band over copyright issues. The image of frontman Chad Kroeger holding up a picture frame, with the words “Look at this photograph”, provides a blank slate for endless fun.

In the Google commercial, Nickelback poke fun at the original song and video with newly written lyrics that even dare make fun of Chad Kroeger’s signature curly locks: “Falling down the photo rabbit hole/ Is it my hair or just a ramen bowl.” The clip features goofy photos of the band through the years, as Kroeger further sings about “regretting all my hair styles.”

Despite a steady stream of mockery over the years, Nickelback will always have the proverbial last laugh, considering they’ve sold millions upon millions of albums. That said, it’s cool to see they have a sense of humor about it all.

As Slipknot singer Corey Taylor pointed out last year, Nickelback have since passed the baton to Imagine Dragons as the world’s most hated band. Just give it another 10 years before Imagine Dragons parody “Radioactive” for a commercial promoting nuclear power plants.

Check out Nickelback’s highly entertaining Google Photos commercial below, followed by the full lyrics to the reworked song and the band’s recent appearance on Consequence of Sound’’s Kyle Meredith With … podcast.

Falling down the photo rabbit hole
Is it my hair or just a ramen bowl.

Every memory regretting all my hair styles
If you wove it all together, it would go for miles
It’s hard to braid it, time to shave it.
Good-bye / Highlights

Every memory we never have to look for
They no longer have to spread out on the bedroom floor
It’s time to say it, gotta say it
Good times, Good times

Every time I do it makes me…

Previous Story
His Dark Materials Renewed For Third and Final Season
Next Story
Showrunner of the Year Eric Kripke on The Boys: “We Should Always Be Punching Up”
Popular
More Stories
[fu-upload-form form_layout="media" title="Submit Your Photo"][input type="hidden" name="ugc" value="1"][/fu-upload-form]