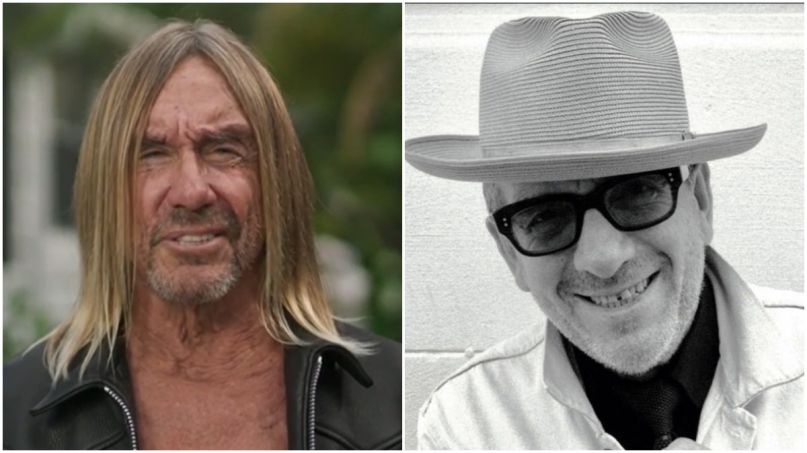 Back in October, Elvis Costello released his 31st album Hey Clockface, which included a song called “No Flag” that was partly inspired by Iggy Pop. Today, Pop has returned the favor by releasing a cover of the tune that’s sung almost entirely in French.

In a Rolling Stone conversation between the two rock legends, Costello expressed his surprise that nobody picked up on “No Flag” being a nod to Pop’s classic track “No Fun”. “[The title] should have been a clue right away,” Costello told Pop. “It shared one word and one letter with a famous song of yours [“No Fun”], but nobody spotted where it was drawing from because nobody expects me to take a cue from you.”

To drive the connection home, Costello decided to enlist the Godfather of Punk to put his own spin on the track while singing in French. Pop’s 2012 record Après featured numerous French language songs on it, but he told Costello that singing the gnarled and brooding “No Flag” outside of his native tongue was still quite an undertaking.

“[This song] was quite an effort,” Pop said. “Nobody official asked for it. It was just Elvis and [his wife] Diana [Krall] asking, ‘Do you want to sing this in French?’ And I thought, ‘Well, the French will be a big chore. I can do that.’”

He wasn’t exaggerating when he said it would be a time consuming endeavor — though a rewarding one nonetheless.

“There’s a uniqueness to the French language,” Pop said. “No other language has vowels that sound like that. Learning a song that’s as quick as ‘No Flag’ took a month of practice because my lips weren’t used to those combinations…I [worked on it] for 40 minutes a day for about five weeks. You don’t want to do too much work on it at once or it’s not fun anymore.”

Fortunately, Pop at least had some outside help with translating the songs lyrics. Murial Téodori, who’s married to keyboardist Steve Nieve, who played in Costello’s backing bands The Attractions and The Imposters, and her son, Antoine Jules Ulysse Quessada, who played drums on Hey Clockface, made sure Pop wasn’t singing in broken French.

“You sound absolutely convincing in French,” Costello said of Pop’s singing. “When I played your version to Murial she said, ‘This is unbelievable. You’re so inside the song.’ Diana and I were both listening to it with tears in our eyes.”

Take a listen to both versions of the song below.

Pop and Costello met backstage at a show in 1977, and Costello has been a fan of his work for many years. However, it wasn’t until Costello saw a recent BBC performance of Pop’s that he decided the time was right for a collaboration.

“You closed the show with ‘Lust for Life,’” Costello recounted to Pop. “You ran past the cameras and into the audience. I was like, ‘This is so full of joy and it’s also the kind of music that the authorities usually say, ‘Let’s ban this music immediately because it’s going to cause some trouble.’”

Last month, Pop virtually inducted Nine Inch Nails into the Rock and Roll Hall of Fame. In our review of Hey Clockface, Jordan Blum wrote that it’s a terrific record and a testament to the investigational cleverness of Elvis Costello.”