"Really, only three songs? How 'bout I play them on guitar for you!" 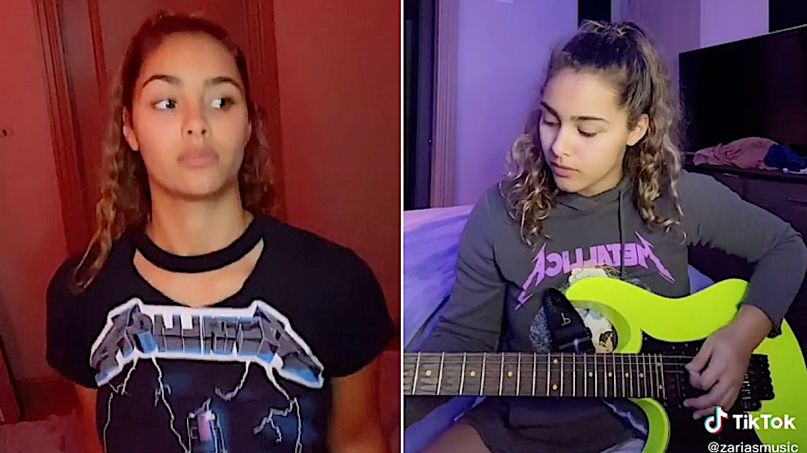 A TikTok star set out to seek and destroy commenters who called her out for wearing a Metallica shirt in her videos. Not only did aspiring R&B/hip-hop vocalist and dancer Zaria prove she was a fan of the iconic metal band, she proceeded to shred some of their classic songs on guitar.

Celebrities and social media personalities wearing heavy metal T-shirts as a fashion statement is nothing new. We’ve often wondered, “Do the Kardashians really listen to Metallica and Slayer?” So, it’s not surprising that Zaria got some pushback in her comments section, with at least one person challenging her to “name three Metallica songs.”

Well, Zaria took her response one step further. In a clap-back video, she exclaimed, “My response to you guys is like, ‘Really, only three songs? How ’bout I play them on guitar for you!'” She then proceeded to shred portions of “Master of Puppets” and “Enter Sandman”, and took it a step further by adding, “Someone’s gonna criticize me for not doing leads, so here’s that little fun thing in ‘One’.” And yes, she performed some nice finger tapping from “One”.

In subsequence videos, she accepted more challenges, including playing the full “One” solo and ripping through “Battery”. After getting some media coverage, she’s now hoping that Metallica themselves notice her talents.

See a string of TikTok videos chronicling Zaria’s Metallica response below. She currently has more than 100,000 followers, but we’re guessing she’s been adding some metalheads to her total in recent days.

Reply to @paytonnsmith I hope this video finds the #Metallica fans lol, not my best #guitar playing but that wasn’t really the point #guitarist

Reply to @davidgriffith970 too much reverb but u get the point. Comment suggestions and I’ll play for y’all #guitar #guitarist #metallica