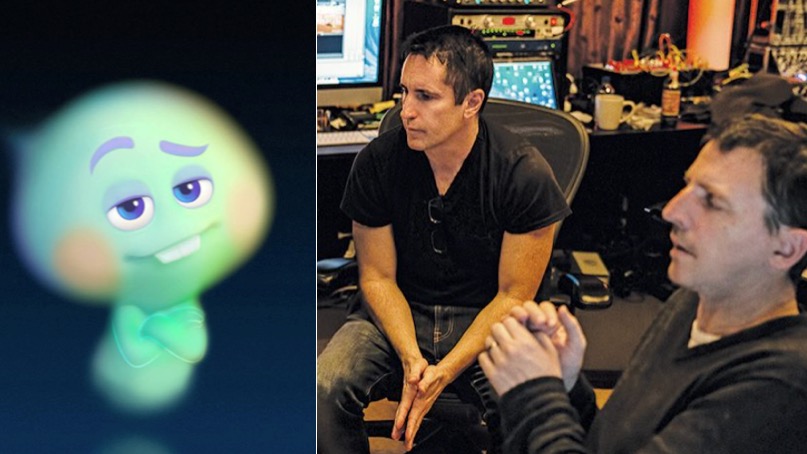 Trent Reznor and Atticus Ross composed the score for Soul

Trent Reznor and Atticus Ross have composed many film scores in their day, but Pixar’s Soul marks the first time the Nine Inch Nails members have made music specifically for an animated children’s film. We’ll get to hear what it sounds like come December 18th, when Reznor and Ross’ score receives a digital and vinyl release (pre-orders are now ongoing).

As previously reported, Soul stars Jamie Foxx as Joe Gardner, a passionate music teacher with dreams of being a big-time jazz performer. But on the eve of his big break, an unfortunate accident causes his soul to separate from his body. Rather than going to The Great Beyond, though, he escapes to The Great Before, a place where souls develop the personalities of the humans they’ll inhabit on Earth. There, he meets 22 (voiced by Tina Fey), with whom he must help pass the Great Before training in order to get back to his body before it’s too late. Read our review of the film here.


In an interview discussing their creative process for the film’s score (via Heroic Hollywood), Reznor explained, “Our first step is always to listen and really try to understand where the filmmakers are coming from: what they’re seeing, what they’re imagining. We spent a lot of time discussing how you’re supposed to feel when you’re first exposed to the Soul world. Then we went back to our studio, which is filled with a variety of real, imagined and synthetic instruments, and spent the first chunk of time experimenting with different arrangements and different instruments and seeing what felt emotionally right to create the fabric of this world.”

Ultimately, Reznor and Ross created a specific piece of music for each of the locations featured in the film: The Great Before, The Great Beyond, The Astral Plane, and The You Seminar. They then “multitrack recorded them as if we were scoring with an orchestra,” Reznor explained. “We came up with a few techniques over the years that take sounds that aren’t of this Earth necessarily, yet they feel warm and organic and natural.”

Reznor and Ross also recently composed the score for David Fincher’s new Netflix film Mank. Before that, they provided the soundtrack to HBO’s Watchmen, for which they earned an Emmy Award for Outstanding Music Composition.