Also check out performances from Harry Styles, Dua Lipa, and Sam Smith, plus a brief cameo from BTS 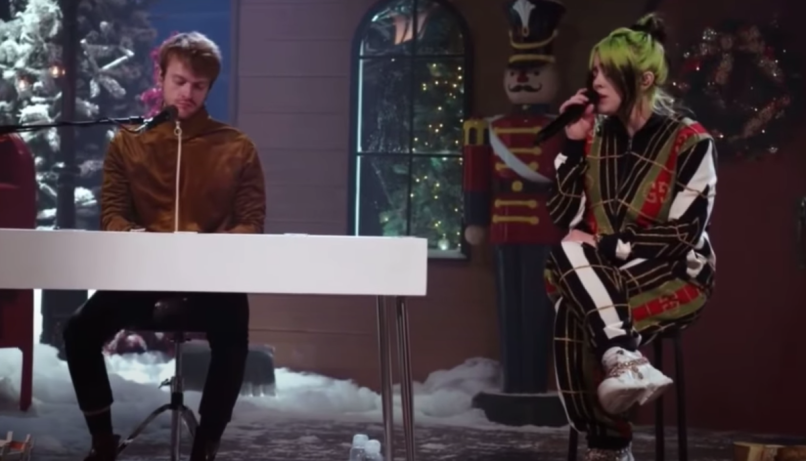 Like most music festivals in 2020, this year’s Jingle Ball was forced to go completely digital. However, that didn’t stop its many prominent pop performers from creating their own version of a Winter Wonderland on Thursday night. Billie Eilish, for example, gifted fans with lots of “snow” and a very cozy Christmas cover.

With help from brother and longtime collaborator FINNEAS, our 2018 Rookie of the Year performed her soothing version of the seasonal standard “Silver Bells”. Eilish, puffy fake snow beneath her feet and a toy soldier looking over her shoulder, reminded viewers that Christmas can still feel heartwarming and perhaps almost familiar — even if nothing else really does at this moment in time.

The megastar’s Jingle Ball set also included a performance of “My Future” and new single “Therefore I Am”, which we recently named one of our favorite songs of the year. Eilish also took some time to open Christmas gifts.

Watch her “Silver Bells” cover below, followed by a video of her full set. Eilish’s holiday spirit continues this weekend, as she’s next set to take part in Cyndi Lauper’s star-studded virtual Christmas concert alongside Taylor Swift and Phoebe Bridgers.

Elsewhere during the Jingle Ball broadcast last night, our Band of the Year BTS dropped in for a super brief cover of “Santa Claus is Coming to Town”. Dua Lipa delivered a stripped-back version of her Future Nostalgia single “Don’t Start Now”, as well as a cover of John Lennon’s “Happy Xmas (War is Over)” with assistance from fans all over the world.

Sam Smith melted hearts with their stunning rendition of “Have Yourself a Merry Little Christmas”, while Doja Cat got a little sensual with her take on “Santa Baby”. Harry Styles also performed a special version of his single “Golden”, accompanied by Anderson .Paak’s live backing band The Free Nationals.

Check out all of these 2020 Jingle Ball highlights below.

"Have yourself a merry little Christmas." 🎄❄️ – @samsmith